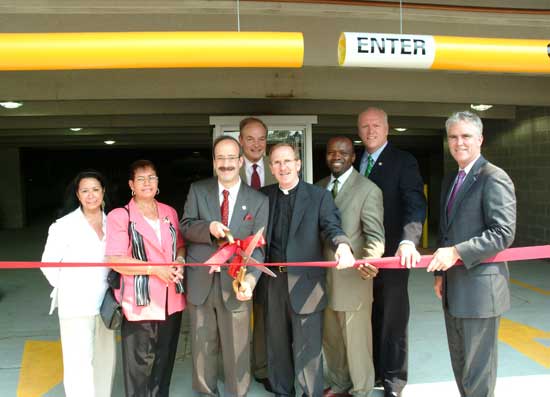 The long-awaited Fordham Regional Parking Facility, serving both the University and the local community, is open for business.

Bronx leaders joined with the Fordham community on the morning of Saturday, Sept. 9, to cut the ribbon on the brand new parking facility. The five-story garage, built adjacent to O’Hare Hall on what was the University’s south parking lot, has the capacity to house 1,546 vehicles and will be completed prior to the Christmas holiday this year, though three stories of parking are available for use now.

Brian Byrne, Ph.D., vice president for administration, kicked off the ceremony by welcoming those in attendance and thanking a wide array of government officials, local community leaders and the Fordham community as a whole for their help in making the project a reality.

“We believe that the investment made by our three branches of government in this project will be paid back many fold by benefits to us all,” Byrne said.

The facility will not only provide long-term parking for the University community, but will also serve as a short-term garage for patrons of the nearby Department of Motor Vehicles office, and for visitors to the Bronx Zoo, New York Botanical Garden and Belmont commercial district. The University will also provide regular shuttle bus service from the garage to these locations and to other points in the surrounding community. Following the completion of the garage, the north parking lot located near the main entrance to campus will be converted to green space.

“In a special way, I want to acknowledge Eliot Engel, who really moved heaven and earth to help us with this project,” said Father McShane. “We are deeply grateful to you.”

Engel said he fought so hard for the funding because of what the University means to the surrounding community and the Bronx as a whole. “I was born in this borough, and I’ve lived in this borough all my life, and you cannot mention the Bronx, ever, without thinking and mentioning Fordham University,” said Engel. “Everyone knows this is a great institution, and this parking facility shows that it is not only a great institution for those that are here, but it’s a great institution for all the people of the Bronx. Occasionally when you’re in elected life, you feel that maybe you’ve made a little difference, somehow, in people’s lives.”

Father McShane also praised Byrne’s hard work on the project, joking that Byrne likely spent an unhealthy amount of time working to ensure the development of the much-needed facility went as smoothly as possible. “This project is a project that has taken many, many years, and many years out of his life, and he has been endlessly patient, always creative, and always a man of great faith as he pushed this project forward,” said Father McShane.

Earl Brown told the audience that the new parking garage represents positive steps forward in the realms of education, environment and economic development. “It’s really about partnership between Fordham University, the Bronx community and the other institutions around it,” said Brown. “This facility is really very special, and it’s very exciting that we are here today to inaugurate it.”

Prior to the official ribbon cutting, Father McShane noted the socializing that preceded the event and said that no official opening for the facility was really needed, since the parking garage had already begun to fulfill its mission of helping to bring the University and the community closer together.

“For the past hour and a half, this facility has been doing what we want it to do. This facility been a magnet, bringing together all portions of the Bronx community, all portions of the New York community,” said Father McShane. “And for us at Fordham, that’s important. I think our opening already occurred, when everyone felt at home, when Fordham drew everyone in. And conversation was rich and lively, and the conversation was geared towards getting things done, especially for the Bronx.”