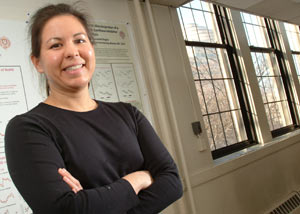 Gail Langellotto, Ph.D., has adapted well to the wilds of Westchester County, where she works at the Calder Biological Field Station.
Photo by Chris Taggart

Gail Langellotto, Ph.D., is an unabashed city girl, born and raised in gritty Baltimore, Md., and her first weeks at Fordham’s Louis J. Calder Biological Field Station in Armonk were a bit of a hair-raising experience.

“It was scary at first,” she said. “There were great horned owls outside my window and coyotes howling at night.” She has since grown accustomed to her rural surroundings, calling the quietude of a research facility within 30 miles of New York City’s rich cultural possibilities “the best of both worlds.” (For example, she can see her beloved Baltimore Orioles when they come to the Bronx to play the Yankees.)

Langellotto, an assistant professor of biological sciences, earned her bachelor’s degree in biology, as well as master’s and doctorate degrees in entomology from the University of Maryland. For the admitted “science nerd,” the inspiration of one of her undergraduate biology professors, David Wise, turned her to the realm of bugs.

“He made insects seems so cool,” said Langelletto. Her first project with Wise consisted of the study of wolf spiders, which have a great deal of sibling cannibalism, beginning with fatal battles among the young while they are still being carried on their mother’s back.

Despite their unsavory behavior, Langellotto still “really fell in love with spiders” and went on to study them as a potential means of pest control. She discovered that creating a complex, fractal habitat where the spiders would encounter each other less led to better pest control, since the spiders were eating other insects and not each other.

Her fieldwork included a stint at University of California, Davis, where she studied the effects of pesticide-free farming with California organic cotton farmers and papaya growers in Hawaii. “But I wanted to come back to a city,” she said.

Coming to Fordham four years ago, her interest was drawn to pollinating insects and their use of urban gardens (Langellotto calls them “islands in a sea of concrete”). She theorizes that as native plants become fewer in number, community and private gardens may provide nectar and refuges for native pollinators including bees and butterflies.

She noticed that many urban gardens, whose aim was to produce food for their local community, required pollinators in the key role of plant reproduction. How did bees move from garden to garden, she wondered?

Here’s where a bit of manual dexterity came into the picture. By painstakingly capturing the bees and painting numbers on them (“we used a lot of ones and sevens until we got good at painting,” she jokes), Langellotto and her researchers are now able to track bees and how they manage to find the “island” gardens.

In 20 community gardens in East Harlem and the Bronx, Langellotto and her team of four graduate students, two undergraduates, and two high school students have encountered 51 bee species—just 12 percent of the total number of bee species in New York State. They’ve even recorded the sighting of one species for the first time in the state. One question she is attempting to answer is why there are few ground-nesting bees in New York City, and conversely, why there are so few tree-nesting bees in the suburbs. Another interesting phenomenon she’s exploring is why the use of a special floral mix to attract pollinating insects to a garden actually had a negative impact on plant production.

Her role is also an educational one. She often explains to city gardeners the difference between the bee and the wasp: while bees help pollination and rarely sting unless provoked, wasps are simply pests. She tries to discourage urban folk from indiscriminately killing the very things that may help their gardens prosper. Another myth that Langellotto tries to dispel is of the perfectly manicured field, i.e. one that is clean and insect free. This, she says, is not really the best condition for cultivation.

The entomologist has also profited from listening to the people on whose land she works. As part of the United Nations Development Project’s Equator Initiative Community, Langellotto journeyed to Curitiba, Brazil in 2005. She said it was “an eye-opening experience” witnessing local and indigenous people talking to scientists, in a country where some had been locked out of traditional lands that had become nature reserves.

They told us, “We’re sick of scientists,” said Langellotto. That changed her notion of the scientist’s role as that of impartial, aloof observer, she said. “That’s doing a disservice.”

Langellotto’s newest research is the study of genetically engineered rice,which already has a pesticide encoded into its DNA. There is consideration for introducing it in Vietnam, where a wild relative of the lab-produced rice grows. Langellotto says there is the danger of a “transgene” effect, wherein the genetically modified crop crossbreeds with the wild variant. The effect of such cross-fertilization is unknown.

“I’ve always loved sciences,” said Langellotto. Now, she jokes, “I’ve found a job where I get paid to play outside all day.” She comes indoors, still, to teach “Insect Ecology” at Rose Hill. And after four years of living in Armonk, the coyotes and owls hardly bother her at all.