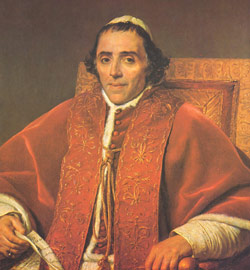 The Jesuits faced rising hostility for various reasons, including the anti-religion ideas of the Enlightenment, their accommodation of the cultures in China and India in their ministry, and the perception that they fomented revolt among the South American tribes ruled by Spain and Portugal.

The king of Portugal had begun the expulsion of the Jesuits in 1759. In France, three years later, the Parlement of Paris closed all Jesuit schools in its jurisdiction on April 1. Four months later, the Parlement effectively banned the Society from France and confiscated its buildings and estates.

The Society was then suppressed in Spain and parts of Italy before the worldwide papal suppression in 1773. (Catherine the Great of Russia disregarded the supression so she could keep the Jesuit schools in her domain.)

The suppression was ended in 1814 by Pope Pius VII, who sought to restore religion in Europe after the collapse of the Napoleonic Empire.