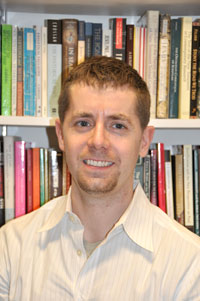 Benjamin Dunning, Ph.D., assistant professor of theology, has received a 2009-2010 research fellowship to the women’s studies in religion program (WSRP) at the Harvard School of Divinity.
Dunning is the first man to receive the award in the program’s 35-year history.

He received the fellowship to work on a book, Specters of Paul: Sexual Difference, Creation, and Resurrection in Early Christian Thought, and will join four female professors as visiting research associates.

“Ben’s work represents the cutting edge of that of a new generation of scholars for whom feminist theory is foundational to religious studies,” said Ann Braude, director of the women’s studies in religion program and senior lecturer on American religious history.

Dunning’s project examines the ways in which second- and third-century Christians theologize what “sexual difference” means, particularly in relation to bodies, culture and desire. According to Dunning, the apostle Paul’s theology of creation and resurrection widely shaped and constrained early Christian thinkers on the subject of the body and how it was conceptualized.

Dunning will explore the question of how sexual difference fits into Paul’s conception of where the body came from (Adam) and where it was going (Christ).

“Christians managed to produce widely divergent accounts of what it means to be a sexed human being,” he said.

Dunning designed and currently teaches a course, “The Bible and Human Sexuality,” at Fordham. He recently taught graduate-level courses focusing on gender and early Christianity and on contemporary feminist theory. He is a co-founding chair of the Sex, Gender and Sexuality in Pre-modern Christianity consultation in the American Academy of Religion.

Dunning observed that his appointment is an indication that the field of women’s studies is in a “transitional moment.”

“What began as a project to bring more women’s voices, women’s stories and women’s history into the academy is far from finished, but in addition, academia has begun to explore what typically in the field is called gender studies, to ask, ‘What is gender?’” said Dunning. “At different times, Christians have thought differently about what the gender division is, what it means, and how it matters theologically. And this, of course, complicates how we think about women’s voices and histories—and men’s as well.”

The area of gender studies, Dunning said, is increasingly becoming a discipline in which both men and women are interested in doing research.
He will receive a $50,000 stipend and expenses.