“I think terror and art go hand in hand. I really do. If you’re not scared, you’re not doing it right.”

Daniel Alexander Jones, who alternately describes himself as a crazy uncle of Fordham’s theatre program and a farm animal that keeps breaking out of its pen, knows a thing or two about pushing the envelope. 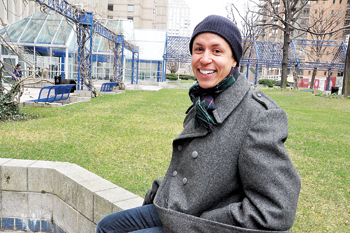 Daniel Alexander Jones strives, through his performance art, bring elements of theater into the concert realm and to build bridges between his audience members.
Photo by Patrick Verel

An assistant professor of theater who came to Fordham five years ago, Jones is the head of the playwriting program. He teaches classes in acting and theater history, namely Flying Solo, and Young, Gifted and Black. An Africana studies major at Vassar College, Jones created Young, Gifted and Black when he arrived at Fordham. Yet the concepts that go into Flying Solo are what he considers to be his strength.
“I like helping students realize that they have something to say that they can take from a thought all the way through research, writing, and then performance,” he said.

Through the genesis and developmental steps, he said, it can get “super hot” in the classroom.

Jones’ own theater work is also immersed in performance art and its history. He describes it as a means of exploring how we are bigger than the boundaries that we often try to live inside of.

“How is it that we can slip outside of those boundaries? When do we break them? When do they stop working? What kinds of situations come along that challenge us to act in ways our identifiers wouldn’t suggest we could?” he said.

“I’ve always been interested in integration and transgression, with integration being a positive spin where you can mix things together, and transgression being the place where people do things that cause everyone to get upset and riled up. Since I was trained in black American theater, a lot of my initial concerns had to do with race, identity, and culture and activism.”

Jones’ vehicle for this exploration is Jomama Jones, a fully realized soul singer in the vein of Tina Turner, whose performance in a 2011 concert and “motivational happening” was hailed by the New York Times as “glow[ing], making it hard not to surrender to this sequin-encrusted earth mother’s soulful embrace.”

Jomama is such an integral part of Jones’ performance work that he speaks of her in the third person and jokes that her “career” is going better than his. Jomama recently finished a fourth album of songs with musical collaborator Bobby Halvorson and performed live at Joe’s Pub last month.

“I love making [Jomama’s] music and I love the experience of performing live with an audience in that kind of context, because you can sneak theater into a concert and the audience doesn’t know it’s coming,” he said.

Jomama will star in a musical adaptation of L. Frank Baum’s The Marvelous Land of Oz, which takes place after the events in the Wizard of Oz. Jones wrote the adaptation—which he titled Bright Now Beyond—while on a faculty fellowship last fall. It will debut next year in Austin, Texas at Salvage Vanguard Theatre.

What attracts Jones to Jomama’s character is her ability to make audience members feel more connected with one another as they share the experience.

“Is it possible to be inside a piece of live art, a theatrical experience, where we feel closer to one another? We share a concern, we fall in love with something, we laugh ‘til our belly hurts at the same things, and find in that common experience that suddenly, though we seemed really different from each other, that our connections matter more,” Jones said.

“As artists we can sometimes be highfalutin and be perceived to have our airs and think we’re making an impact in ways that we may or may not be doing. But I do hope that anyone who comes to see anything that I’ve made walks away feeling more connected to the people who are there with them.”

When it comes to teaching, Jones says the challenges are twofold: speaking to students in a way that makes them feel like a task is doable, while at the same time challenging them to see it’s not often as simple as it seems when they lack experience.

It’s also a challenge to get undergraduates to break out of the habit of finding the “easy answer,” a habit enabled by sites like Wikipedia and Google.

“My teaching is the hardest when it involves an idea that is itself a paradox that requires some really deep thinking. When you actually have to sit with something that’s not going to make sense, that’s the hardest thing,” he said.

“But it’s the most important thing, because you can’t make art if you aren’t willing to inhabit a place where you don’t have an answer. You have to have the experience.”