skip to main content
Return to Fordham University
You are at:Home»Inside Fordham»Theater and Theology: FCLC Senior to Pursue the Life of a Jesuit 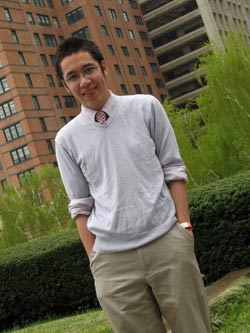 At Fordham University, Perry Petrich, a senior at Fordham College at Lincoln Center, found a sense of community—a community he would like to be a part of for the rest of his life.

A double major in theater and theology, Petrich came to the University after graduating from the Bellarmine Preparatory Academy, a Jesuit prep school in Tacoma, Wash. Petrich loved the Jesuit education he received at Bellarmine and wanted to continue in that tradition through college. But why travel across the country to study with the Jesuits?

“Part of it was 17-year-old naiveté,” said Petrich, echoing the desire of many students who come to Fordham from distant states and other countries to spend their college career in the Big Apple. But more than that, Fordham was the only place in the world where he could not only study in the heart of the theater community but maintain his ties to the Jesuit order as well. “If you want to study theater at a Jesuit college, Fordham is the only place to go,” he said. “It’s the obvious choice.”

Though the theater program brought Petrich to the University, his academic quest did not stop there. Through his studies in the University’s Core Curriculum, Petrich became interested in theology. In fact, he loved his theology classes so much that he stayed at the University for a fourth year, despite having completed his requirements for a theater degree a year earlier, in order to finish his senior thesis and graduate as a double major.

“It helps when you like the department, like the professors and like the subject matter,” Petrich said. “I thought it would be a wonderful opportunity to do some more academic work, and to continue with this wonderful faculty.”

Petrich was also involved with the University’s Global Outreach program, participating in a trip to a rural village in Thailand. While there he witnessed a level of caring among the villagers that to him was remarkable. Although the village was poor and had many homeless people, no one slept on the streets. Instead, villagers with homes took turns housing and feeding those who needed their help. For Petrich, this experience was an example of the University experience, where learning is not just in the classroom.

After graduation, Petrich will take the first steps toward entering the Jesuit order himself. Even though he did not expect to become a Jesuit priest when he first came to the University, Petrich saw the sense of community that the Jesuits helped to foster, both at his high school and at Fordham, and decided to answer the Jesuit call.

“The community that I’ve experienced at Fordham, both in the theater and the theology departments, is a community of life, of supporting one another and working toward the same goal,” Petrich said. “And that’s the lifestyle that rings true for me.”