skip to main content
Return to Fordham University
You are at:Home»Inside Fordham»The Taste of Fordham? It’s Dark, Rich and Smooth Like Velvet 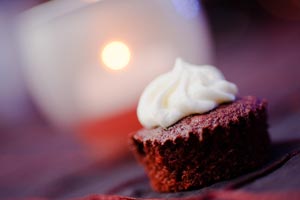 Those were the questions on everyone’s lips—and taste buds—when Fordham conducted a campus-wide competition to find its signature dessert.

Fending off all comers from a field of 31 entries was Maroon Velvet Cake, submitted by Rick Manista, a senior at Fordham College at Lincoln Center.

“Velvet Cake is something that can be used for special occasions, but it’s also homey and casual, so it can be enjoyed anytime,” Manista said.

The richly flavored cupcake features a tender texture and a hint of cocoa, topped off with a dollop of white chocolate frosting. Manista, a psychology major, based the treat on his grandmother’s recipe for Red Velvet Cake, though he said the frosting was his idea.

“I learned all of my baking from her,” he said. “After she died, no one in my family ever made anything, so I always try to cook and bake to keep her memory alive.” 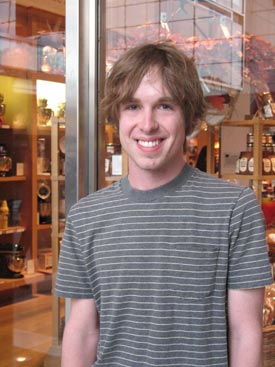 The selection of Maroon Velvet Cake as Fordham’s dessert of record was the final step in a process that began when administrators, food service managers and executive chefs sent out a call for submissions at the start of the semester.

“We all agreed that this dessert would have to be one that did not require a fork to eat, and that it would have to be something that could be produced in large quantities without putting too much strain on our everyday operations,” said Brian Poteat, general manager of the University’s hospitality services division.

A committee of 15 students, staffers and chefs from Sodexo narrowed the field to five finalists. Fordham’s head chefs worked for a week to churn out more than 1,500 samples for a University-wide taste test on Oct. 17. The other finalists were:

• Buono Biscotti ala Fordham, made by Rosemary Marmorato, a senior secretary in the Department of Psychology on the Rose Hill campus.

• Marooned Cookies, made by Barbara Kittle (FCRH ‘78). Kittle honored her grandmother by entering her original recipe into the contest.

• bRAMies Brownies, made by Alessandra Vaccaro, a senior majoring in classical languages at Fordham College at Lincoln Center.

Even before the votes were tallied, Manista’s offering made a strong showing in some non-scientific exit polling.

“The Velvet Cake is delicious,” said Kate Cavanagh (FCLC ’05). “I’m taking this very seriously because it’s a dessert representing Fordham, and it’s going to be around a very long time.”

First-year Fordham Law School student Keith Greenberg, 22, picked his favorite after devouring samples of all five desserts, which he somehow balanced in one hand while holding a stack of thick legal books in the other.

“The Velvet Cake was executed in the best fashion,” Greenberg said. “One of the others had not enough flour for my taste. Perhaps there was too much air that hit another [entry]when it came out of the oven.”

The winner had its coming out party on Friday, Oct. 24 at the annual President’s Ball.

Hundreds of Maroon Velvet Cakes adorned the main table in the Grand Ballroom at the McGinley Center. The dessert fueled the festivities, as stylish undergraduates ran from the dance floor to the table throughout the night, relying on the cupcake to keep the party going.

“It’s tasty, but not too sweet,” said Veronica Marsteller, a junior at Fordham College at Rose Hill. “That’s good, because I’ve been eating a lot of them.”