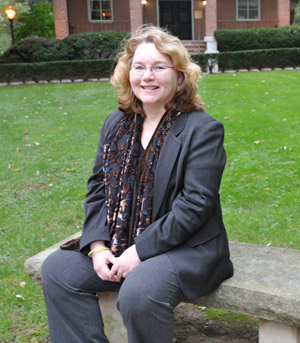 Micki McGee, Ph.D., assistant professor of sociology, is charting the relationships between artists at Yaddo and 20th-century cultural life.
Photo by Patrick Verel

Can one person change the world around him or her? Perhaps, according to sociologist Micki McGee, Ph.D., but it’s a lot harder than you might think.

McGee, an assistant professor of sociology at Fordham College at Rose Hill, researches the role of culture and individual action in creating social change.

She spent five years reading and analyzing best-selling self-help literature and visiting self-help groups and workshops for her bookSelf Help, Inc.: Makeover Culture in American Life (Oxford University Press, 2005). Her research on self-help literature argues that the increased prevalence of the literature itself indicates great anxiety among Americans, who saw their real wages decline over the last quarter of the 20th century.

McGee argues that Americans are not just overworked, but also belabored—required to work on themselves to remain competitive.

“You take yourself as an object to be worked on, that you labor upon yourself to make yourself a more marketable product,” she said.

This past winter, her research on that community resulted in “Yaddo: Making American Culture,” a major exhibition at the New York Public Library and an accompanying volume from Columbia University Press.

The exhibition—which drew 75,000 visitors and received national and international press coverage—featured more than 500 letters, artworks and artifacts. Since 2006, she has been working to develop a digital network mapping tool to chart the social relationships of Yaddo members and their creative production.

“I research questions of culture, agency and structure and how—and to what extent—individual action is successful or thwarted,” she said. “What can a person do in the face of existing social structures?”

Although she is skeptical of the notion that people have absolute control over their destinies—the very ideology that drives self-help literature sales—McGee said the story of Newton Arvin, a Yaddo resident who was Truman Capote’s mentor and lover, shows how people can effect tremendous change.

Arvin grew concerned as early as 1935 about the exclusion of African Americans from Yaddo.

“He was unhappy with that, and while he couldn’t change racial segregation for the whole world, he wanted to change it at Yaddo. He wanted to resign from the admissions committee, but apparently his resignation was not accepted,” McGee said.

“Through his efforts, over the course of five years, Yaddo came to the decision to admit African-American writers and artists. It was a difficult decision, but Langston Hughes was invited—several years before Jackie Robinson integrated professional baseball. When Hughes came to Yaddo, then suddenly the Harlem Renaissance artists and writers had an opportunity to come to Yaddo,” she explained. “So one person’s insistence actually did have an impact on that institution.

“This idea that pursuing a life that is about creativity and artistic integrity has come to permeate self-help culture. Of course, it is also part of artistic communities and artistic culture,” McGee said. “If artists are the model for how people can eschew corporate or bourgeois values, then those threads run through both artistic communities and self-help literature. So I’m really interested in looking at those ideological formations.”

Mapping the relationships between and among Yaddo’s guests has been a central part of McGee’s research in the Yaddo archive. This past summer, McGee spent a month at the University of Southern California’s Institute for Multimedia Literacy as a fellow at a National Endowment for the Humanities Summer Institute on expanding the digital humanities. Working with a team of technologists, she continued work on a long-range project of developing digital maps of the social networks among artists supported by Yaddo.

A person like the 20th-century literary figure Malcolm Cowley, who was a long-time Yaddo board member and frequent guest, for instance, would be an important point in the social network, because he was an editor at The New Republic, friends with the poet Hart Crane and sat on the committee that accepted Truman Capote into Yaddo.

“Whose careers moved in what directions based on what relationships? Whose work influenced others’ work, and also, from a sociological point of view, what kind of critical mass is necessary for creative production?” McGee asked. “We know there’s this idea that artists go to bars or clubs or hang out in places like Yaddo and make lifelong friendships and influence each other’s work. But what does it really look like, and can you map what it looks like, and trace cultural and intellectual histories?”