skip to main content
Return to Fordham University
You are at:Home»Faculty Profiles»The Loneliness of Sovereignty 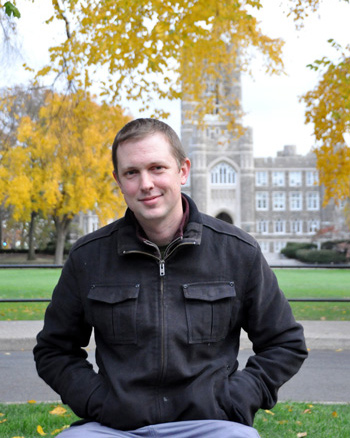 Christopher Dietrich researches the history of U.S. foreign relations with an emphasis on decolonization and intellectual history.
Photo by Chaewon Seo

The modern consumer need only start her car or heat his house to understand why oil is a keystone of global commerce. Less obvious, however, are the political and economic attitudes that formed the bedrock of industry in its early days.

Christopher Dietrich, Ph.D., an assistant professor of history, argues that oil production in the 20th century is linked to the redistribution of power in what he calls the “high era of decolonization.”

Throughout the 20th century, vast global empires such as Great Britain and France disintegrated, making room for dozens of new nations to materialize. And as these developing nations eschewed the colonialism of their past, the global economy began to change as well.

In his forthcoming bookShadows of Empire: Anti-Colonial Law and Economics in a Sovereign Era, Dietrich analyzes how staunch anti-colonial thought affected the international economy, including the oil industry, after World War II.

Political autonomy had an important upshot, Dietrich said, in that it allowed countries newly freed from imperialistic rule to develop without outside interference. However, there was also a downside: by declaring themselves sovereign nations in an international community, these countries closed themselves off from certain interactions and partnerships with the rest of the world.

Dietrich’s research traces the ramifications of sovereignty and oil production in the mid-20th century. He identifies a group he calls the “subaltern elite,” a loose collection of oil ministers, development economists, international lawyers, U.N. bureaucrats, and others who came to represent the interests of developing nations.

“These subaltern elites used the idea of sovereignty as the great organizing basis for the international community,” he said. “So you have this fairly cohesive group asserting national sovereignty as a right, especially the idea that a nation controls its natural resources.”

Different oil-producing nations came together officially in 1960 as the Organization of Petroleum Exporting Countries (OPEC), an intergovernmental cartel formed to coordinate the policies and interests of oil-producing countries. OPEC declared that each nation possessed a “sovereign right” its national resources. It was a declaration, however, that had paradoxical consequences.

“As that control became understood as a right of nations, the oil producers began to work together through OPEC to limit supply, therefore pushing up the price. But when they pushed up the price, [that extra cost]limited the ability of other nations to [remain]sovereign in the international community.”

This problem became apparent in 1973, when the Arab members of OPEC embargoed oil exports to certain nations and all members of OPEC introduced overall cuts in oil production. The action placed a huge financial burden on other developing nations struggling to assert their political autonomy. Countries that lacked natural oil resources of their own were forced to take out loans in order to replace the additional money they had to spend on oil.

“And yet it’s independence from that type of global system that they sought when they emphasized their sovereignty during the previous two decades.”

In addition to studying the impact of anti-colonial thought, Dietrich researches the history of U.S. foreign policy and international opinion about those policies. He has published editorials on the concept of the United States as an “informal empire,” namely, a powerful nation that asserts control over other countries, people, or resources without formally colonizing them. Examples of the practice of informal empire include the Vietnam War, the extension of that war into Cambodia, and, more recently, the use of drones in the Middle East.

In a recent editorial for CNN, he noted that the Justice Department of the Obama Administration explicitly used a Nixonian legal rationale to justify drone strikes in Pakistan and Yemen.

“The argument is that because terrorist organizations move across borders, the United States itself needs to also move across borders, and has the right to do so,” he said. “This is bad logic and does very little to ensure American national security, no matter how broadly defined, and it actually does a great deal of damage to U.S. reputation… in the sense that it alienates the United States from most of the international community.”

While past and present instances of imperialistic overstretch are not often directly linked, Dietrich said, such policy decisions suggest a recurring problem.

“Nationspossessed with an outsizedconfidence are susceptible to attractions of simple solutions,” he added. “It’s very easy for American leaders to forget the complexity of the situations they’re dealing with, both historically and in the present.”

In the video below, Dietrich discusses how current U.S. foreign policy sometimes wrongly draws on the past to justify actions such as targeted killings: