Back in 2008, Arnond Sakworawich went with a colleague to a federal office in the Bronx to get his Social Security number. 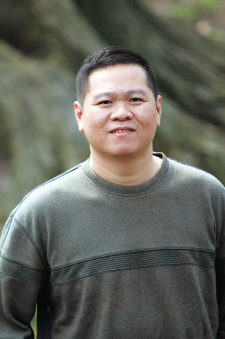 Arnond Sakworawich, GSAS ’13, arrived from Thailand in 2008. He plans to continue research in the educational testing industry.
Photo by Tom Stoelker

Having just arrived from his native Thailand, the experience was an eye-opener. His colleague got the number right away, but Sakworawich had to return five more times before getting his.

“I was finally like, ‘I’m going to start talking back,’” he said. “So I learned how to argue back in English and I got the number.”
Having come from Bangkok, Sakworawich was more than a little familiar with city living, but the fast-paced competitiveness of New York City took him by surprise. Nevertheless, he came to the city with a very specific goal in mind, so bureaucratic red tape was not about to hold him back.

In Bangkok, Sakworawich unwittingly laid the groundwork for what would eventually lead him enroll at to the Graduate School of Arts and Sciences at Rose Hill. He studied business management as an undergraduate, obtained an M.B.A. in international business, and further pursued a master’s in industrial psychology at Chulalongkorn University.

While there, he came across a book on psychological testing by Anne Anastasi, Ph.D., the world-renowned psychologist who taught at Fordham and chaired the Department of Psychology from 1968 through 1979. It brought together his love of statistics and his interest in psychology.

“I read her book and I thought she was a genius,” said Sakworawich of the psychologist who is known for launching the field of psychometrics and quantitative psychology. “That book brought me here.”

Psychometrics and quantitative psychology deal with the measurement of psychological traits, behavior, ability, and IQ with rigorous mathematical and statistical models. The science is perhaps most familiarly applied in selection processes, such as testing for potential employees and/or students applying to school.

Under the guidance of his mentor Charles Lewis, Ph.D., professor of psychology, Sakworawich worked on developing models for college placement and classification. He received GSAS and College Board fellowships.

While the applications of his field are wide, he hopes to continue in the educational testing industry, which is concentrated in urban centers on the East and West coasts, including New York.

“In the beginning, it was tough,” he said. “But I am fine with New York now.”