Inspired by the words of Pope Francis, students from Fordham’s International Economy and Development (IPED) program have created a measurement tool to aid the world in evaluating poverty. 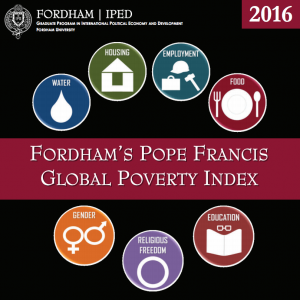 The FFI focuses on seven simple factors that the pope sees as indicators of poverty, and which he proposed at last year’s United Nations General Assembly: water, housing, employment, food, gender equality, religious freedom, and education. The innovative focus of both the pope’s proposal and the FFI is on political rights for the poor; few other poverty indexes distinguish these freedoms as vital indicators of poverty, said Henry Schwalbenberg, Ph.D., director of IPED.

“Studies show that there is, in fact, a connection between these spiritual indicators and hard economics,” he said. “Newly developed indexes are adding a multidimensional definition of poverty—and it’s a really great thing.”

By allowing those who are impoverished to improve their physical, economic, and mental well-being, they will be able to live independently and become “dignified agents of their own destiny,” as Pope Francis has described.

“We’re hoping that [our index] will empower civil societies,” said Schwalbenberg. “We want groups around the world to use this simple measure to hold their governments and other administrations accountable for the state of their society.” 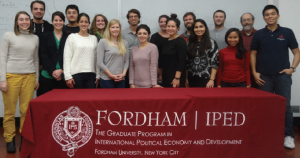 The IPED students who formulated the FFI

The 37-page FFI compiles statistics that civil organizations can use as a benchmark to determine the material and spiritual state of their populations, and work to improve them through the U.N.’s Sustainable Development Goals. While finding statistical data on most of the indicators was relatively simple, Schwalbenberg said, researching the connection between religious freedom and poverty proved difficult. In fact, it is a pioneering approach to looking at the issue.

“This aspect is ignored by many people but shouldn’t be. Religious freedom has a correlation to corruption and social hostility, which is why countries try to take religious freedom away,” said Schwalbenberg.

The report is being made available for download on Fordham’s IPED site over the next weeks. But this is only the start of the FFI, said Schwalbenberg, since now it is up to the people of the world to take it and adjust it to their own circumstances.

“This index isn’t set in stone; we want it to be expanded upon by other schools or communities. We tried to be as transparent as possible so people can make their own index. People will interpret Pope Francis’ speech differently and weigh different indicators more heavily than others. This is only the beginning of the process.” 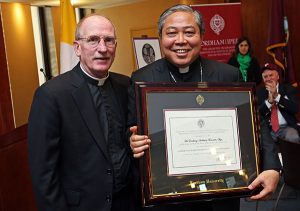 The day’s event also served as a venue for Joseph M. McShane, S.J., president of Fordham, to install Archbishop Bernardito Auza as the inaugural holder of the endowed Cassamarca Foundation Chair in Migration and Globalization. Archbishop Auza is the U.N.’s Observer of the Holy See.

“We are honored that you have accepted this post,” said Father McShane.

In addition, the conference featured lectures by Sabina Alkire of Oxford University; Liliana Carvajal, GSAS ’04, monitoring specialist of UNICEF; and others. It was co-sponsored by CAPP USA and was part of the University’s Dodransbicentennial celebration.