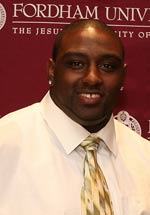 As the athletics season winds down, the Fordham University Department of Athletics held its 73rd annual Block F Awards dinner at the Villa Barone Manor on May 2 to honor the University’s student-athletes for their accomplishments in the 2006-2007 academic year.

Among those honored was Marcus Taylor, a 6’1″, 244-pound linebacker, who received the Vincent T. Lombardi Award as Fordham’s top male student-athlete, as well as being named Most Valuable Player of the football squad; and Kerstin Greene, who received the Claire and Jack Hobbs Award as Fordham’s top female student-athlete. Greene was also named Most Valuable Player of the women’s indoor track and field squad.

The Vincent T. Lombardi Award is presented to the Male Athlete of the Year for distinguished athletic achievements in the winning tradition of Vince Lombardi. The award honors the memory of one of Fordham’s famed “seven blocks of granite,” who is considered to be one of football’s greatest coaches.

The Claire and Jack Hobbs Memorial Award is presented to the Female Athlete of the Year for distinguished athletic achievements while displaying outstanding sportsmanship, citizenship, leadership and dedication. The award honors the memory of Claire and Jack Hobbs, who were both avid Fordham Ram fans. 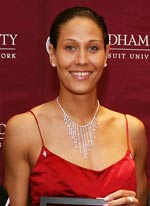 Greene, who also won the Hobbs Award last year, has accomplished much in her time at Fordham. This season she garnered Atlantic 10 Indoor Field Performer of the Year honors at the 2007 conference championship. She also earned Second Team All-Atlantic 10 honors in the long jump and high jump events. She successfully defended her ECAC pentathlon title, and went on to finish fourth in the event at the NCAA championships, earning All-America honors.

This spring, Greene has continued her assault on the Fordham record book, earning 2007 Atlantic 10 Outdoor Field Performer of the Year honors after shattering the conference record in the heptathlon with 5,088 points. Altogether, she currently holds 11 school records.

The full list of Block F award winners is: