Like many who graduate from high school, Dustin Bennight wasn’t quite sure he wanted to go to college. After briefly trying a few courses, Bennight, a native of Seattle, decided he wasn’t ready to make the four-year commitment. 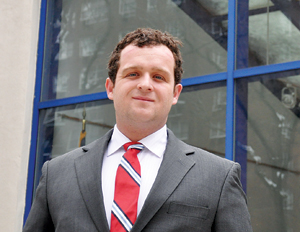 Instead, he joined the U.S. Navy—traveling the world, doing challenging work, and gaining the commitment to education that eventually led him to Fordham’s School of Professional and Continuing Studies (PCS).

Today he is embarking on a career in which he helps other nontraditional students—specifically, professional football players—advance their studies while pursuing their careers.

“What I’ve just been through, that’s where these players are now,” said Bennight.

Bennight’s Navy career took him to many distant ports of call. While stationed at Pearl Harbor, he was deployed to Southeast Asia and then the Middle East, traveling to ports in Singapore, Thailand, Japan, China, and the Philippines, among other places.

He picked up skills along the way and learned to handle “a lot of responsibility at a young age.”

“You might have to drive the ship in the morning, and in the afternoon be in charge of a fire or damage-control drill. You definitely learn how to juggle several things at one time,” he said.

After his deployments, he applied to Fordham when he noticed its veterans’ programs on the University website. Today he graduates as one of PCS’ first Yellow Ribbon class of veterans.

Bennight recalls being nervous about enrolling. Even though he was comfortable doing emergency drills or overseeing a navigation course, the idea of classwork was daunting.

“But I quickly discovered that a lot of the skills you get from military service are applicable in the classroom—especially time management,” he said.

Bennight’s ability to focus and manage multiple tasks translated into academic and professional success. He is graduating with a degree in political science, a strong academic record, and a full-time job.

And not just any job. As a player engagement coordinator with the New York Giants, he helps run a continuing education program for incoming players. He got the job this year, following a referral from the National Football League, where he worked until December as a security investigations assistant.

In chasing these opportunities, he got help from mentoring programs (Barclays Capital, American Corporate Partners) that helped him cultivate a corporate presence, and work his military experience into a polished résumé.

“Something like ‘expert in M-16 qualification’ might not work on a résumé, so it becomes ‘supervised a gun safety course,’ and suddenly it works,” he said.

Bennight enjoys helping Giants players make the same passage he did. “We give them opportunities to intern, take class, and to get into the same programs that I have been involved in”—such as résumé-building and mock interviews—so they can plan for a career beyond the gridiron.

“Not every player plays for 15 years, or is a hall-of-famer,” he said.

He noted that many new players are drafted before they finish college—sometimes with only 70 or 80 credits.

Returning to school in the diverse pool of students found at PCS helped build Bennight’s academic confidence. In September, he will begin a master’s in sports management at Columbia University.

New York City has grown on him just as school has, he said. “If I’d gone to Kansas State, I wouldn’t be working for the Giants.”