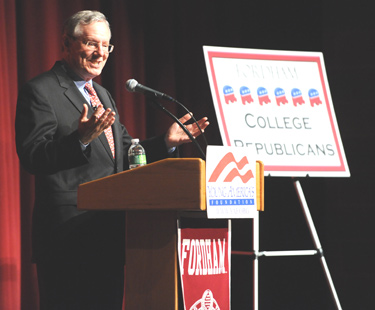 Steve Forbes points to the actions of the Federal Reserve in 2002 as the main cause of the economic downturn.
Photo by Chris Taggart

If the United States is going to recover from its fiscal crisis, it will need less regulation of business, Steve Forbes said to an audience of Fordham students.

Forbes, the president and CEO of Forbes, Inc. and a presidential candidate in 1996 and 2000, expressed his ideas about the global recession and promoted his recent book, How Capitalism Will Save Us: Why Free People and Free Markets Are the Best Answer in Today’s Economy (Crown Business, 2009).

He wrote the book with Elizabeth Ames, CEO of BOLDE Communications, because he said capitalism has gotten a bad rap, including the charge that it is inherently immoral. Like a fish that doesn’t realize the wonder of the water that surrounds it, Forbes said, free markets improve people’s lives in ways that they take for granted.

“One of the worst things that Congress has ever done is define economics as the allocation of scarce resources,” he said at the April 27 event at Fordham Prep. “Boy, that is inspiring. That has ‘dismal science’ written all over it. It’s not about the allocation of scarce resources. In free markets, it’s about the creation of resources and about turning scarcity into abundances.”

Forbes pointed to the actions of the Federal Reserve in 2002 as the main cause of the economic downturn. Like the Great Depression, inflation in the 1970s and every other major economic disaster, he said the present difficulty was caused by massive government errors.

“To say that this crisis was caused by banker greed is about as helpful as saying gravity causes airplane crashes,” he noted.

In the hopes of avoiding a downturn like the one Japan went through in the 1990s, the Federal Reserve artificially suppressed interest rates and, in effect, pumped money into the economy.

“This was the wrong thing to do. The Federal Reserve, or any central bank or any central government, has absolutely no business changing the value of money,” he said. “Money should be stable in value. Print too much of it, and you distort things, like too much fuel distorts the function of your automobile.”

This caused a chain reaction that led to a spike in the price of commodities in 2003. Investors turned to the housing market, thanks to the capital gains tax exemption and new forms of mortgages that required no down payment. The result, he said, was $1.5 trillion in junk mortgages and a housing bubble that burst.

As for the future, Forbes said that Republicans should not count on the economy as an issue they can run on in the November mid-term elections. He also predicted that the economic recovery would be short-lived—similar to the 1970s—and not like growth in the 1980s and 1990s, much of which he credited to Ronald Reagan.

Low taxes, a strong dollar and a government that stays out of business it doesn’t belong in—like health care—will be the key to success, he said.
In the question-and-answer session, Forbes addressed how free markets can help the needy.

“In a true free market, the people who start out with the least have the best chance to move ahead. Why? Because you have a growing economy, which means better jobs are being created,” he said. “So you start out with a simple job, like a summer job at McDonald’s or Wendy’s or whatever. You start to learn some basic skills, and as your skills increase, so do your chances to move up in life.”

Surveys by the IRS, Forbes said, have verified this upward mobility. When social scientists talk about the bottom fifth quintile of the population, he noted, they focus too much on the widening gap between them and the top fifth.

“They overlook the fact that most of those who start out in the bottom quintile, after a decade or 20 years, have moved way up, many of them to the first or second quintile. As you get skills in a vibrant economy, you move ahead. So for those who start out with very little, the free market is their best friend,” he said.

“It’s tough to make a business succeed, but Steve Jobs was abandoned by his biological parents; Larry Ellison was an orphan; and Bill Gates was a middle-class kid who dropped out of Harvard. So some of the most unlikely people end up doing extraordinary things,” he said.

His appearance was sponsored by the Fordham University College Republicans and the Fordham Finance Society.