skip to main content
Return to Fordham University
You are at:Home»Faculty Profiles»Square Knots, Surfaces, and the Shape of the Universe 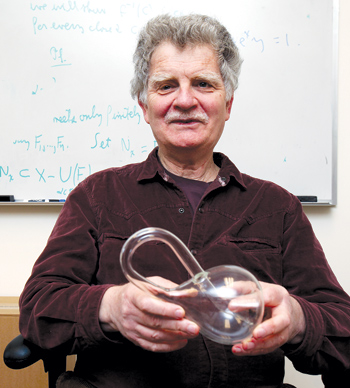 William Singer, Ph.D., studies a field of mathematics known as algebraic topology. Above, he holds a Klein Bottle, a figure of topological fascination that can only be fully pictured in the fourth dimension.
Photo by Bruce Gilbert

As a professor of mathematics, William Singer, Ph.D., knows that the mere mention of his work in algebraic topology could make someone take a nervous step backward and sheepishly confess to having never been good with numbers. That kind of math anxiety, though, comes from a fundamental misconception about mathematics, Singer says.

And if you have ever tied shoelaces or thought about the difference between a basketball and a football, then you already have insight into this little-known area of mathematics.

Topology is a branch of mathematics that studies the properties of figures that don’t change when a figure is twisted, stretched, or compressed. In this variant of algebra, numbers are a rarity. Singer instead studies what things look like—from two-dimensional surfaces, to three-dimensional objects, to even higher dimensions.

“If you showed a geometer the surface of a sphere and the surface of a football, he would say that the two are very different,” Singer said. “But a topologist would not distinguish between them.”

That’s because the two groups of mathematicians disagree over the kinds of transformation that can be made to an object before it is considered changed. For example, if the sides of a sphere were stretched outward until they became points, it would look like a football, or an ellipsoid. Geometrically, the sphere and the ellipsoid are different because they have distinct surface areas, volumes, lengths, and so on. But topologically speaking, they are one and the same, because the sphere has been deformed in a continuous fashion to become an ellipsoid. 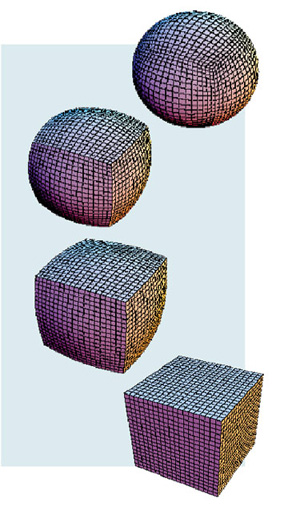 Pressing on a sphere to give it six sides turns it into a cube. Geometrically, a sphere and a cube are different, but topologically they are the same.

The same can be said of more complicated figures as well. One topological joke describes a topologist as someone who cannot tell the difference between a doughnut and a coffee cup. That’s because, in topology, the surface of a coffee cup can be deformed to look like a sphere with a handle, and this surface can be deformed, in turn, to the surface of a doughnut. Geometrically, the doughnut and the coffee cup are very different; topologically, they are equivalent.

The topological rule of thumb: Stretching, deforming, or twisting an object keeps it the same as it was before; cutting, tearing, or pasting it changes it.

Topology, a word with Greek roots meaning “the study of place,” is not a new discipline, having played important roles in electromagnetic theory and theoretical physics throughout the last two centuries. It gained significant momentum in 1916, when the emergence of Albert Einstein’s general theory of relativity began to raise questions about the shape of the universe. Einstein’s theory, together with startling new discoveries in astronomy, gave topologists new incentives to imagine and classify three-dimensional universes.

Just as cartographers helped to depict that the earth was a sphere rather than a plane, topologists have been able to show what a curved universe might look like.

“The algebraic tools [used in topology]are a way to see things,” said Singer, who also has a master’s degree in physics. “We don’t know the global geometry of our universe yet, but topology gives us the tools to imagine what might be.”

In addition to playing an important role in theoretical physics, topology also makes appearances in the fields of statistics and robotics, Singer said. In statistics, topologists can describe the shapes and configurations of data clouds. And using their knowledge of how to manipulate objects without essentially changing them, topologists improve robots’ navigational capacities by calculating how they can efficiently move between obstacles.

A recent undertaking for the field has been in molecular biology, which draws on the work topologists have done in knot theory. This branch of topology analyzes and attempts to classify the structure and properties of knots, with special attention to what makes one knot different from another.

“Recently, there’s been an alliance between knot theorists and molecular biologists, because some forms of DNA are knotted,” Singer said. “There have been collaborations between the two to describe these very large molecules and how they are embedded in space.”
So while mention of the quadraticformula is enough to send some running for the humanities, Singer is a reminder that there is much more to mathematics than the number-laden versions of it that most people encounter in their schooling.

“Mathematics is a living subject with many unanswered questions,” Singer said. “And it’s a global effort—there are people all over the world who work on these problems. We are a community.”