skip to main content
Return to Fordham University
You are at:Home»Inside Fordham»Smartphone Data Reveal More Than You Think

Owners of smartphones take for granted that when they tilt their phones sideways, their screens adjust
from a vertical to a horizontal display.

Gary M. Weiss, Ph.D., has found that the sensor that governs this function, known as a triaxial accelerometer, can be used to determine detailed information a 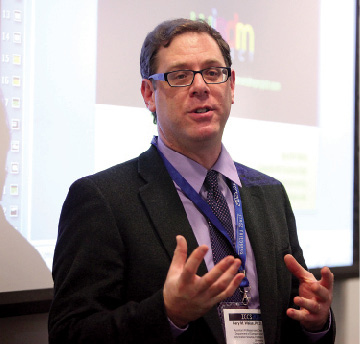 Research by Gary M. Weiss, Ph.D., has shown that smartphone data can be used to predict the sex of the user 71 percent of the time.
Photo by Bruce Gilbert

bout who is holding the phone and what activity he or she is performing.

Weiss, an assistant professor and chair of the Department of Computer and Information Sciences at Fordham, presented his findings in the presentation “Mining Smart Phone Data” on Jan. 11 at the 2012 International Conference on Cyber Security at Fordham.

The research is part of the WISDM (Wireless Sensor Data Mining) Project, which Weiss is leading with funding from the National Science Foundation, Google and Fordham, and assistance from a dozen Fordham undergraduates.

“You have to understand how something is being used before you can ensure security and privacy,” he told a standing-room-only crowd of security professionals.

The idea is to use the data generated by a smartphone to make predictions about who a person is and what he or she is doing at a particular time—whether it’s walking, running, jumping, climbing stairs, or sitting.

“Why would we want to do this, assuming we’re not a hacker trying to sell this information? As a data miner, we want to exploit data to the greatest extent possible. We want to learn things about you and use them in an ethical manner,” he said.

“If we can track your activities, then we can have some measure of how active you are, and that can be useful for you to monitor your health or your children’s health.”

Examples of potential applications of this data include sending a call directly to voicemail if the phone knows a person is running, switching to inspirational music if a jogger is slowing down (i.e., the theme to Rocky) or calling 911 if an elderly user falls.

“Based on the way you move, based on the accelerometer in your pocket, we can tell who you are, at least within a restricted pool of people,” Weiss said. “Thus, smartphones can be used for biometric identification, just like laptops now can use face recognition to recognize their users.”