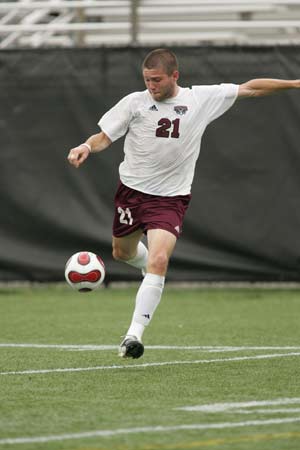 Senior Kevin Meyer is in exclusive company as
one of only 20 men’s soccer players to be
candidates for the CLASS Award.
Photo by Vincent Dusovic

Fordham University soccer player Kevin Meyer has been selected as a candidate for the national Celebrating Loyalty and Achievement for Staying in School (CLASS) Award sponsored by national home-improvement retailer Lowe’s.

The award is presented annually in eight NCAA Division I sports to a senior athlete who excels both on and off the field. Twenty men and 20 women have been selected as candidates for the 2007 soccer awards, which are based on personal qualities that define a complete student athlete.

Meyer, a senior from South Windsor, Conn., was the only Fordham student selected. A business administration major with a concentration in finance, Meyer is a two-year team captain, and has been a staple in the line-up for the past four seasons.

Since his freshman season, he has been one of the driving forces for the rejuvenation of Fordham men’s soccer, and has led the team in scoring each of the last two seasons, racking up six game-winning goals. Last season, he earned Second Team All-Atlantic 10 and Third Team All-Mid-Atlantic Region honors.

In the classroom, Meyer was named to the Dean’s List last semester, as well as to the Atlantic 10 Commissioner’s Honor Roll. He was also one of more than 200 Fordham student-athletes honored at the Fordham Department of Athletics’ “Breakfast for Champions in which all student-athletes with a GPA of 3.0 or higher are recognized.

Meyer also completed two internships. During the spring semester, he interned with Merrill Lynch, and during the summer worked for FIFA, the international governing body for soccer.

He is active off the soccer pitch as well, serving his fellow student-athletes on the Student Athlete Advisory Committee as the men’s soccer representative. He has been instrumental in the development of the Breakfast for Champions event, and has been a speaker for it as well.

His volunteer work includes the New York Botanical Gardens and Mt. Sinai Hospital, where he served as an activity coordinator for young cancer patients.

The CLASS award, conceived by sportscaster Dick Enberg, was established in 2001, and it originally recognized players in men’s and women’s basketball who stayed in school until their senior season. Lowe’s extended the award in the spring of 2007 to include four other NCAA sports: baseball, softball, men’s hockey and men’s lacrosse. With the addition of men’s and women’s soccer in fall 2007, a total of eight sports are now included in the awards program.

From the current list of 20 candidates in each sport, a national committee will select 10 finalists in both men’s and women’s divisions. Those names will then be placed on a ballot for a nationwide fan voting that will run through Nov. 21. Fan balloting will be coupled with votes from coaches, media and sponsors to determine the winners. Winners will be announced during the NCAA Soccer Championships in December.