skip to main content
Return to Fordham University
You are at:Home»Inside Fordham»Scientist Charts Effects of Climate Change on Hibernating Chipmunks 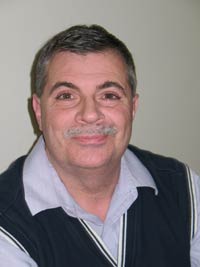 Craig Frank, Ph.D., has studied hibernating chipmunks at the Calder Center.
Photo by by Janet Sassi

A biologist at the Louis Calder Center Biological Field Station has uncovered new information about how climate change may affect the hibernation patterns and survival of mammals.

Craig Frank, Ph.D., associate professor of biology and a mammalian ecologist, has been examining the hibernation patterns of free-ranging eastern chipmunks since 2000. His data shows that exceptionally high winter temperatures correlate positively with reduced hibernation, resulting in a lower winter survival rate for these animals.

Following a different set of free-ranging chipmunks each year, Frank used radio telemetry collars to measure their body temperatures. Readings from these collars were taken by an automated radio receiver system every three hours from Nov. 1 through April 30—the eastern chipmunk’s usual hibernation season. The readings enabled Frank to measure when, and for how long, each animal hibernated, since an animal’s body temperature during hibernation drops to nearly the same temperature as its surroundings.

“Very little is known about how climate changes influence mammalian communities, but investigations over the past five years have suggested that species that use hibernation to survive the winter may be particularly sensitive to it,” Frank said. “We think climate change may be affecting their torpor.”

Data showed that the chipmunks followed normal hibernation patterns from fall 2003 through spring 2006, averaging an 87 percent survival rate through the winter.

But the winter of 2006-2007 was exceptionally warm. In fact, November and December 2006 were the warmest winter months on record in New York state, according to the National Climactic Data Center (NCDC). During that 2007 winter, only 11 percent of the chipmunks (one out of nine) entered hibernation, whereas during previous winters all chipmunks examined had hibernated.

After the winter period ended, Frank recaptured only the one chipmunk that had hibernated. The rest, he said, were never found and their collars emitted only a low, steady temperature which was the same as soil temperature.

In addition, data indicated that the surviving chipmunk stopped hibernation at the end of March, which Frank said is early. “He spent less time hibernating than we have seen in previous years,” Frank said. “But he still survived.”

Frank said he developed the idea for this research largely by accident. In 2003 he received a National Science Foundation grant to develop a 24-hour automated radio telemetry system that would measure the body temperature of small free-ranging mammals for other experiments. Once he designed a prototype system, he tested it on eastern chipmunks because they are a locally abundant hibernating species.

The eastern chipmunk typically uses a combination of hibernation and food hoarding to survive through the winter, Frank said. They hibernate in their underground nests, waking up occasionally to consume some of the stored food.

If such environmental changes continue, Frank said, the larger question becomes how the 75 species of mammals that depend on hibernation for survival, including the eastern chipmunk, will adapt.

“We may see an evolution in hibernation behavior toward a strategy that is less sensitive to the climate shift,” said Frank, who recently presented his research findings at the fall meeting of the American Geophysical Union in San Francisco.

Last October, Frank and his assistants radio collared more chipmunks for monitoring throughout this 2007-2008 winter season. According to the NCDC, that month was the warmest October in New York state since 1895.

“The jury is still out on the rest of the winter,” Frank said. “But already in January we’ve hit 65 degrees.”