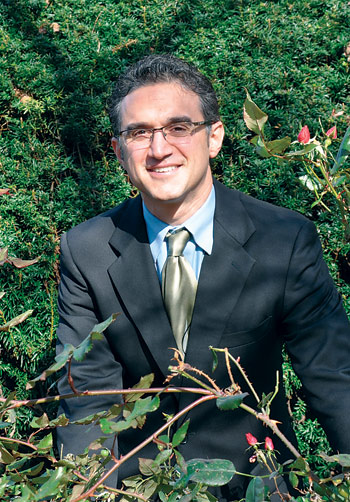 Contemporary political theorist Nicholas Tampio, Ph.D., has written on the need for a new Enlightenment, given today’s religious pluralism.
Photo by Janet Sassi

And while many existing secular governments grew from that Christian-dominated Enlightenment, the assistant professor of political science argues that, today, political theorists need to face a new reality.

“In our country and around the world, we have interactions between Muslims, Hindus, Christians, Confucians, Jews, Mormons, and atheists,” said Tampio.

“How do we facilitate healthy political-religious pluralism in this new historical situation?”

Is it time, Tampio wonders, for another Enlightenment?

In his forthcoming book from Fordham University Press:Kantian Courage: Advancing the Enlightenment in Contemporary Political Theory, Tampio suggests that political progressives from both Western and Islamic traditions could benefit from adopting an innovative mindset.

Doing so, he maintains, could help diverse faiths forge coalitions about matters of common concern, including terrorism, the environment, and a just distribution of global resources.

“There is a powerful argument in Islamic political thought that holds that the Quran and the Prophetic tradition provide sufficient guidance for politics,” said Tampio. “Anything else is bid‘a, or blameworthy innovation.

“The difficulty is that the Quran and the Prophetic tradition do not mention democracy, human rights, or liberty—all concepts that originate from ancient Greece. Thus Islamists oppose many Western political ideologies.

“We need to invent new political theories to address the problems of the age—rather than hold to outdated political concepts and frameworks.”

Tampio’s perspective has found an ally in the work of Tariq Ramadan, Ph.D., a professor of Contemporary Islamic Studies at Oxford University who has called for a Muslim intellectual revolution along the lines of Kant’s Copernican revolution.

What makes Ramadan so interesting, said Tampio, is that he thinks across the Islamic sciences and Western philosophy. Ramadan situates himself in an Arab cultural renaissance movement that encourages ijtihad—the creative exercise of reason when the scriptural sources are silent. Muslims, Ramadan has said, can learn from and contribute to European and American political thought.

“Ramadan employs ijtihad to argue that Western Muslims may find ways to reconcile their Western political commitments and Muslim identity. One such concept he invents is the space of testimony,dar al-shahada, a place where multiple faiths, including Islam, have the right to flourish.

“He is reviving an Islamic intellectual tradition that prizes intercivilizational dialogue and critical thinking,” said Tampio.

Not surprisingly, Ramadan and his ideas are controversial on both sides of the Atlantic. Because he has criticized the human rights records of Tunisia, Egypt, Saudi Arabia, Libya, and Syria, he has been banned from each of these countries, said Tampio.

Yet many Westerners suspect Ramadan is sympathetic to the Muslim Brotherhood, an organization founded by his grandfather, Hassan al-Banna. (In fact, the Department of State prohibited Ramadan from visiting the United States between 2004 and 2010.)

“Ramadan has the potential to open minds and spark conversations in multiple communities,” said Tampio.

Where Egypt and other transitioning Muslim-majority countries are going politically is hard to predict, Tampio said. Like Ramadan, he hopes that the Arab Awakening leads to the creation of strong civil societies where people of different faiths may exchange ideas—an intellectual revolution alongside a political one.

“A problem with political revolutions is that they change leaders, but the way of thinking persists,” he said. “Ramadan presents a way for Muslims to engage other faiths with respect and curiosity—a process that those in the Kantian tradition ought to reciprocate.”

Growing up outside of Washington D.C., Tampio has long been interested in progressive politics, and participated in C-SPAN youth forums. Eventually he earned his doctorate at Johns Hopkins University.

He hopes his book targets Kant scholars, Enlightenment historians, and anyone interested in Islam and the West.

“I am intrigued by the idea that politics could be modeled on a garden rather than a tree. For tree politics, constituencies may differ as long as they share an ideological trunk.