skip to main content
Return to Fordham University
You are at:Home»Inside Fordham»Scholar Says Business Ethics Begins with a Moral Self 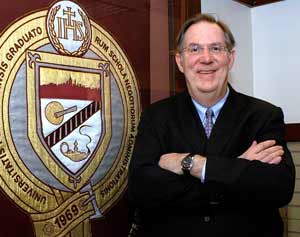 How good a job are business schools doing in cultivating the virtues of tomorrow’s executives and managers? Whatever the answer, Kevin T. Jackson, J.D., Ph.D., professor of legal and ethical studies, thinks they could do better.

Jackson is attempting to “breathe new life” into the debate about how business schools can be more responsive to moral challenges facing the 21st century global economy. It’s a position he presented for a conference on “Rethinking Business Management” at Princeton University, being published in a book of essays that grew out of the conference.

“Instead of focusing on rules for managers, we need to get deeper into moral character,” Jackson said. This approach to reforming business education draws on the tradition of thinkers such as Thomas Aquinas and Aristotle, the theory of natural law and Catholic moral theology.

Though these thinkers and ideas seem like they would be more in line with philosophy or theology, Jackson said they also relate to the business world.

“Morally educated business students need to understand that the virtue they cultivate and bring into the organizations they work for will actually pay off in terms of the bottom line,” Jackson said. “That’s not the reason for doing it, but it makes it very serious for business people because they’ll understand. That’s the way they think—in terms of profit.”

Jackson, who described himself as a “former atheist,” said his worldview began to change in a series of enlightening experiences that unfolded while he was lecturing in India in 1999 and teaching business students at Beijing’s Peking University in 2000.

“Former assumptions started breaking up inside of me” he said. Gradually, due to various influences, such as seeing my wife Zhenni’s instinctive affinity to God, I’ve turned to embrace the Catholic faith. It’s central to where I’m headed.”

Jackson said much of his research harkens to a book he published four years ago, Building Reputational Capital (Oxford University Press, 2004). Written in the aftermath of the Enron and WorldCom scandals, the book offered strategies for integrity and fair play as a way for businesses to improve their bottom lines.

“I said that a company that does the right thing is going to build up its most precious intangible asset—its reputation,” Jackson said. “A solid reputation matters for a firm. It makes people want to work for it, invest in it and do business with it. But it goes much deeper than that now.”

Jackson’s research uses the natural law tradition to develop a rigorous alternative to Integrative Social Contracts Theory, which he said currently stands as “one of the most sophisticated and influential theories of business ethics.”

Key elements from the natural law perspective that Jackson draws upon include the following:

• Human rights, including the tradition emphasizing rights to life, liberty and property;

• Virtue ethics, particularly since business organizations exert a profound effect on the moral character of humans.

“Establishing a theoretical foundation upon human rights, basic human goods and natural reason and virtue,” Jackson said, “will enable a natural law approach to deal with moral issues in business in a way that is intuitively more satisfactory than perspectives based on the liberal ethics of contractuarianism, which is a theory saying that moral rules are a contract, and therefore only beings who can understand the terms of the contract are bound by it.”

Before the Enron and WorldCom scandals, business ethics was taught as a very theoretical subject, Jackson said.

“It was not connected to the bottom line because it would undermine the purity of the moral philosophies that say virtue is its own reward,” he said. “You were taught that either you’re going to do good business or do the right thing.”

After Enron, and currently, business ethics is taught largely as a matter of compliance, Jackson said.

“Do the right thing or you’re going to get caught,” he said as a way of describing contemporary ethics instruction. “We need to get away from that.”

Jackson said he often has to defend his views because some in the fields of world business and business education have knee-jerk reactions that ethics is not important for profitability.

“But that shouldn’t be the underlying reason for it,” Jackson said. “If we take it at face value, naturally there will be a payoff. We’re aiming to do the right thing. In most cases, people want that; that’s what they expect from organizations.”

At a time when free market economics is enjoying renewed acclaim and an unprecedented global market continues to develop, business education is being thrust into the spotlight, Jackson said.

“People are looking for a new approach,” he said. “We can’t escape the question of what will guide multinational companies’ operation in less-developed countries.”

As far as whether the approach should be taught as a separate subject or peppered throughout the business curriculum, Jackson said the methods are complementary. “It deserves to be recognized as a separate area of scholarship, but at the same time, you don’t want it to be siloed away,” he said.

“Most business schools don’t have a clue how to teach human rights. Subjects like that fall outside of the things we teach,” Jackson said. “For me, that’s the missing link.”