Jocelyn Wogan-Browne, Ph.D., was born in Australia and educated at Melbourne and Oxford universities. 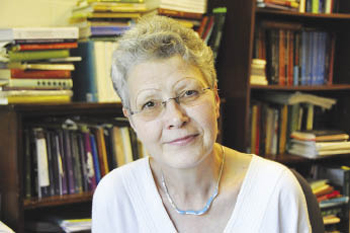 Medieval studies is among the most valuable fields for putting modern culture into perspective, according to Jocelyn Wogan-Browne, Ph.D.
Photo by Janet Sassi

She has taught in Australia, Europe, the United Kingdom and the United States, and has published extensively on medieval virginities, medieval women’s writing, saints’ lives, medieval vernacularity, the French of England, and medieval English multilingualism.

On Oct. 13, Wogan-Browne will be installed as the Thomas F.X. Mullarkey Chair in Literature at Fordham.

You have been dubbed a “virginity scholar” because of your research into medieval treatises on virgins. What led you to that topic?

“Much Western literature is preoccupied with the disposal of young women in marriage. One of the largest medieval exemplary career narratives for women is that of the early Christian virgin-martyr—the young woman who is tortured and eventually killed on the orders of her pagan father, fiancé or judge because she will not abandon her preferred bridegroom, Christ.

“This is a worrying representation of women, and I wondered how the church could propagate it. Through my research on such narratives (some of them translated and reworked by medieval women) and on virginity treatises, I realized that virginity was a complicated and powerful ideal used by men and women throughout medieval culture and could actually be deployed by women to achieve their own aims.”

“The virginity ideal, for example, legitimated resistance to arranged marriage. As some medieval virginity treatises by churchmen argue, ‘Why not spare yourself the potential violence of forced marriage and forced sex, the pains and dangers of pregnancy, and the constant demands of running a household and family? How much nicer to have a nunnery cell of your own where you have time for reading and for Christ, the highest-ranking, most powerful and romantic bridegroom of all.’

“Widows who wanted to live religious lives could also use the language and signs of virginity to achieve this.”

“Our culture constructs sexuality as the heart of identity and people simply assume that virginity is always about literal questions of intactness. But medieval virginity addresses the intactness of feeling and volition in the virgin’s relation with Christ. It allows women space to think of themselves as beings with their own will and their own ethically important decisions to make.”

How did you move from research on virginity and medieval women into medieval multilingualism?

“Medieval women’s writings led me to an interest in the nature of vernacular languages. Women were frequently excluded from Latin learning, yet were important patrons of vernacular literature and sometimes themselves composed vernacular works. What power and authority might be in this vernacular writing, I wondered, and what were the politics of access to representation in writing?

“These concerns also led me to emphasize medieval England’s multilingualism. Nowdays many people in the Anglophone world grow up speaking only English and, hence, they possess a notion of identity as monoglot—a single language, a single culture, a single nation. But medieval England had several vernacular languages, not a single tradition of English.”

Why, in the 21st century, is a subject like medieval studies relevant?

“I get cross when I hear ‘medieval’ equated with ‘primitive.’ I know we tie the Middle Ages of our own invention into our own narratives of desire (knights, castles, rescued princesses, the gothic, etc.) and that ‘primitive’ signals a kind of power. But that’s 1,500 years of highly developed medieval European cultures and societies arrogantly assigned to a simple model of ‘not us’ and ‘before us,’ hence ‘primitive in comparison with us.’

“Our modern global culture has found definitive solutions to none of the great medieval social problems—famine, war, socioeconomic justice, appropriate stewardship of the planet, for example—while aspects of our modern culture and society would strike a medieval observer as barbarous.

“An appropriately complicated dialogue with our pasts puts our own culture’s aims and efforts into new perspective, and medieval studies is among the most challenging and valuable fields for this.”

How will you use your chair appointment to promote these themes?

“I am running a French of England graduate teaching curriculum and a research reading group for faculty and students. There are approximately a thousand ‘literary’ texts extant in this French, forming a significant proportion of literature from medieval England. For instance, there are extant about 800 devotional texts in Medieval English and about 500 in the French of England. There are also innumerable French documentary and administrative records.

“Until recently, French studies have concentrated on continental France and English studies have been concerned only with Medieval English, so this corpus is a fresh and significant research area, affecting graduates and scholars in literature, history, art history and, ultimately, how medieval culture is taught.”