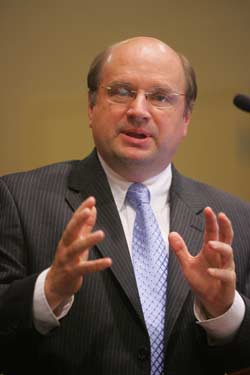 Just as New York City maintains an outsized influence on the culture of the United States, so has the Archdiocese of New York played a central role in framing the American Catholic Church, according to R. Scott Appleby, Ph.D.

With that kind of influence, he said, also come responsibilities.

“Are you being true to your legacy and the model that you have set for us, New York?” he asked during, “Americanism, New York Style: The Archdiocese and the Making of American Catholicism,” on Oct. 23 at the Lincoln Center campus.

“Are you [in New York]continuing to defend the immigrant loudly and creatively and publicly; to promote special care and concern for the immigrant precisely as a quintessentially American value?” he continued. “I haven’t heard as much as I’d like to hear from the archdiocese, nationally, on that issue.”

Appleby, a history professor at the University of Notre Dame and the John M. Regan Jr. Director of the Joan B. Kroc Institute for International Peace Studies, spoke to a packed house in the Lowenstein Center’s 12th-Floor Lounge. The event was part of a lecture series hosted the Francis and Ann Curran Center for American Catholic Studies and the Archdiocese of New York to commemorate the archdiocese’s 200th anniversary.

Appleby’s speech, which was followed by a vigorous question-and-answer session, explored how American Catholicism is part of—and a driver behind—American culture, which is distinct in many ways from the rest of the world.

“Americanism, New York-style is characterized by an ongoing struggle to extend and resolve a dialectic between individual and community; action and contemplation; elite and popular; orthodox and experimental; universal and parochial,” he said.

When celebrating Mass at St. Patrick’s Cathedral, the Pope made two points that were very relevant to the conversation between American Catholic leaders and the Vatican, Father McShane said.

Like his predecessor Peter, the Pope noted that he is a man of weakness, failure and sinfulness who was nonetheless chosen as the rock upon which the church is based. Therefore, he depends on the support, prayers and love of those gathered if he is to fulfill his ministry, Father McShane continued.

“He was saying no, there is no monolithic church; rather the church is made up the loving contention of people together.”