skip to main content
Return to Fordham University
You are at:Home»Inside Fordham»Saluting Those Who Fought Racial Discrimination on the Ground Level 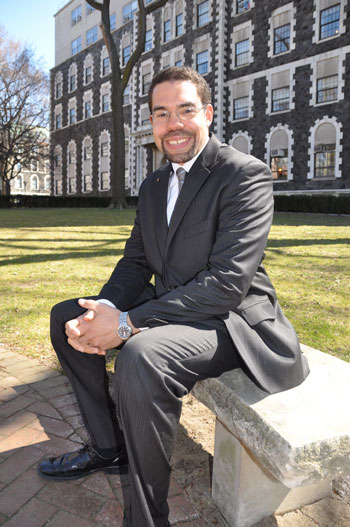 Brian Purnell Ph.D., is investigating how and why racial conflicts turn violent.
Photo by Patrick Verel

Thanks to the work of Brian Purnell, Ph.D., assistant professor of African American studies, some of that era’s lesser-known heroes are getting their due. During an upcoming faculty fellowship, Purnell (FCRH ’00), a historian, will finish A Movement Grows in Brooklyn: The Civil Rights and Black Power Movements in Brooklyn, New York.

The book, which grew from Purnell’s 2006 doctoral thesis, is part of his efforts to examine how racial discrimination shaped social and political life in New York City in the 1940s through the 1970s, and the ways in which activists, community groups and representatives of the state challenged those practices and policies.

Although New York state didn’t codify racial discrimination in the 1960s the way most Southern states did, Purnell pointed out that there were other ways African Americans were made to feel left out.

Brooklyn, which Purnell called home for 26 years, is an excellent subject for study, and one that has been overlooked by scholars, he said. The borough was home to nearly 636,000 African Americans at the end of the 1960s.

After a series of fruitless negotiations with city government to receive increased garbage pickup, the Brooklyn chapter of the Congress of Racial Equality (CORE) took its complaint to Brooklyn Borough Hall in the most literal fashion.

Told by city leaders that the problem of garbage-strewn streets in Bedford-Stuyvesant was partly due to messy residents, leaders of CORE organized “Operation Clean Sweep,” in which volunteers picked up trash left behind by sanitation workers and trucked it to the steps of Borough Hall. There they deposited broken mattresses, refrigerators, old rugs, splintered orange crates and other garbage.

One of the ways that CORE proved its point was by comparing Bedford-Stuyvesant’s coverage to that of Marine Park, a smaller, predominantly white neighborhood that was less dense but had better service.

“The ‘culture of poverty’ argument against people’s behavior is the main way that citizens and, in some respects, politicians ignore widespread discrimination,” he said.

Brooklyn is not Purnell’s only focus, though. As a staff member of the Bronx African-American History Project, he has trained his eye toward that borough. He will be publishing “Desegregating the Jim Crow North: Racial Discrimination in the Postwar Bronx and the Fight to Integrate the Castle Hill Beach Club (1953-1973),” a paper that examines how a public beach club tried to avoid admitting African Americans and how activists and the state fought it.

That particular episode ended without violence, but others did not. One of the questions Purnell asks is how and why violence becomes a factor in racial disputes. An upcoming project will look at CORE’s attempts to desegregate a White Castle on Boston Road and Allerton Avenue, which in 1963 was an Italian American neighborhood.

“One hypothesis that I’m going to work with is that it depends on the socioeconomic background of the residents, or perhaps their history,” he said. “Certain groups of people who are more upwardly mobile can move. Others who have just attained a foothold in the middle class, usually through homeownership, might see African Americans as a threat to their property values or their perceived superiority, and they might react in a different way.”

Purnell said his understanding of race relations has been shaped, in part, by racially charged incidents in Bensonhurst, Howard Beach and Crown Heights. Coming from a mixed-race family, he also knows that people are capable of seeing beyond color. But he is sometimes surprised by how widespread racism is, and how channeled—especially in schools and housing.

“Historically, white homeowners in New York state have not wanted to live next to black people or have their children go to school with black people. The seemingly impenetrable nature of discrimination practices—the way they exist, then arechallenged by activists or laws, but then reappear again later in different forms—can be a bit startling,” he said.

“As a historian, your goal is to be objective and trace out what happened over time,” he said, “and when you’re writing about anti-racist activists, you want to see how they succeeded, but you have to be very honest about how and why they failed, and the work that remains undone.”