skip to main content
Return to Fordham University
You are at:Home»Inside Fordham»Rose Hill Student’s Work Falls at the Junction of Math, Art, and Tire Technology

With a poster displaying splines and polynomials to her right and an illustrated novel to her left, Kathleen Toth’s seesawing between presentations at the Undergraduate Research Symposium on April 17 was an apt conclusion to college. 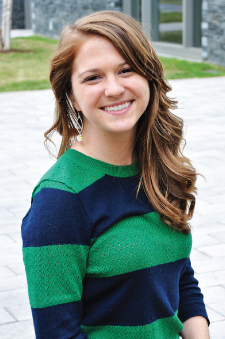 Kathleen Toth is a double major in mathematics and visual arts, two areas she hopes to use toward a career in animation.
Photo by Joanna Klimaski

For Toth, the last four years at Fordham College at Rose Hill have been a balancing act between mathematics and visual arts, in which she is receiving bachelor’s degrees of science and art, respectively.

“I was always successful in math, and art came easily, too,” Toth said of her decision to pursue the double major. “I wanted to get the most out of my time here, so I decided to see if I could make the two of them work.”

The choice was met with skepticism. Her advisors told her that it wouldn’t be possible to finish both majors in four years. Her family expressed concern about what she would do following graduation. But Toth was undeterred.

Her first opportunity to synthesize her two passions came during an internship at the Goodyear Tires world headquarters. A native of Akron, Ohio, the rubber capital of the world, Toth spent two summers in the Goodyear design studio working with a team of engineers. There, she designed a tire tread that was ultimately patented and selected by Goodyear for the 2014 Ford F150, the top-selling vehicle in North America.

“It’s an all-season tire with sipes that help grip the ice, but has enough contact with the ground to get good traction in the summer months as well,” she said. “I don’t get any royalties for it, but for me it’s enough to have it in my portfolio and on my resume.”

Later that year, Toth received Fordham’s Clare Boothe Luce scholarship, which funded her research in mathematics. She and her research partner studied splines, a type of curve in a non-Euclidean geometry known as Randers geometry. They attempted to create a program to calculate these curves when a vector field was applied to them—in this case, wind.

“Say you’re trying to determine a flight pattern between point A and point B in a very windy environment,” she explained. “This program would help you pick the quickest path to get there, which is something that could be used every day.”

And alongside her mathematics research, Toth worked with Assistant Professor of Spanish Sara Lehman, Ph.D., to illustrate a book Lehman edited for college students in Spanish classes. Lehman translated the chapters for Toth, and Toth then created the characters and scenes to accompany the text. The book, Don Catrín de la Fachenda, is slated to be published this month.

Her dual presentations at the research symposium earned her the annual Fordham College Alumni Association Research Award, a $1,000 grant toward her further research in mathematics and graphic arts.

So, a tire patent, a research scholarship, and a published book later, Toth found ways to balance a pursuit of math with her zeal for art—not to mention fulfill the requirements for each major.

“It has shown me that nothing is impossible if you work for it,” she said. “They thought I wasn’t going to be able to finish this major, but I have. And I never would have thought I’d have a patent at age 21, or be an illustrator at age 22, but doors opened when I came to Fordham.”

She said that following graduation, she will likely enroll in a computer science graduate program with the goal of working in animation.

“This next step is intimidating, and I’m not sure where I’m going to go, but I feel that Fordham has given me all the tools that I need,” she said. “I’m going to miss it, but I think I’m ready for this next step.”