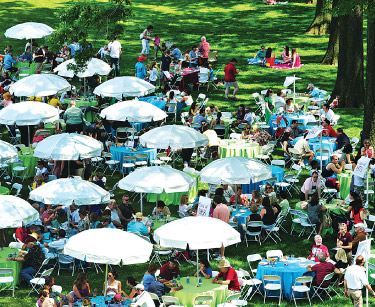 Fordham’s annual Jubilee Reunion was held on the Rose Hill campus from May 31 to June 2.
Photo by Chris Taggart

In greeting alumni returning to the Rose Hill campus for Jubilee 2013, Joseph M. McShane, S.J., president of Fordham, told the Jubilarians that Fordham “was exactly what you remember and completely different.”

“Fordham has now become an elite institution, but we’re not elitist,” he said.

It was a theme echoed throughout the three-day reunion, as alumni took in familiar sites alongside big changes. In a panel discussion, Class of 1963: Then and Now, Paul Saunders, FCRH ’63, trustee fellow of the University, said the physical campus acts as a metaphor.

“The campus has changed a lot, but essentials are the same,” he said. “It’s true of our experience with Fordham.”

“For me Fordham still captures the ideal of what an education should be about, a place that has at its essence the teaching of the full human being,” said Sexton. “There are fewer and fewer places in the world that take this kind of education seriously. We should appreciate that Fordham still does it and we have to make sure it’s able to continue.”

Ramses the Ram was a hit.
Photo by Chris Taggart

Turnout for this year’s Jubilee—held from May 31 to June 2—was an all-time high, with nearly 2,000 Fordham alumni and family returning to the campus for programming that encompassed deans’ lectures, museum tours, a Yankees game, class luncheons, frisbee, cocktail parties, the Jubilee picnic, a gala dinner with dancing, and the occasional jaunt to Pugsley’s, the beloved pizza joint near campus.

A preliminary total of $6.8 million was raised, with many of the donations representing strong emotional ties to the campus. Marc Tambini, FCRH ’08, presented his class’ gift check of $63,710 to Father McShane. The check included a gift Tambini made in honor of his late wife, Hannah Burke Tambini, FCRH ’08.

Tambini’s classmates showed up in force, allowing the Class of 2008 to seize the mantle of Largest Group Under The Tent, for most in attendance throughout Jubilee weekend. The award for traveling the longest distance went to the Class of 1953’s Thomas Lacy, who flew in from Maussane, France. And, of course, no one from the Class of 2008 could vie for the title of Oldest Golden Ram, which went to Lionel Weinstein, PHA ’42.

Alumni were invited by department directors to revisit familiar buildings, and a few that might not have been around when they were on campus. Curator of University Art Jennifer Udell, Ph.D., guided visitors through a collection of ancient sculptures at the University’s Museum of Greek, Etruscan and Roman Art. Inside of Lombardi Fieldhouse, Athletic Director David Roach mapped out future plans for athletics steeped in Fordham’s cura personalis tradition.

“Our mission is for the students to reach their full potential both academically and athletically—and the two aren’t mutually exclusive,” said Roach.

Even though the weekend’s activities were mapped out for alumni, many were seen meandering Edwards Parade, haunting old dorm rooms, photographing Ramses the Ram, and marveling at the Hughes Hall renovation.

Despite his background in computer science, Michael McDonald, FCRH ’63, still found it surprising to see “all these monitors—not books” in the Walsh Library. Mary E. Perry, FCRH ’74, reminisced about the old Duane Library, which she recalled as “old, dark, and scary.”
Though the Marymount College alumnae didn’t share memories of the Rose Hill campus, they took the opportunity at Jubilee to share recollections of their own campus in Tarrytown. Therese Hackett Cedrone, MC ’78, recalled snowy hikes down the steep hill into town, and struggling back up hours later.

Despite the loss of the Tarrytown campus, Cedrone said she relished the opportunity to meet up with classmates in the Bronx. “Fordham has done a good job; we’re all made to feel at home here.”

For the Class of 1963, celebrating their Golden Jubilee held special resonance. Joseph Spadaro, Ph.D., FCRH ’63, said he was a “day hopper,” and didn’t live on campus, so the level of emotion he felt when he stepped back onto the campus for the first time in 50 years took him aback.

“You come in from the Bronx and then there’s this oasis, this green place with less traffic,” he said. “It’s such a strange feeling when you see the familiar alongside the unfamiliar. It was very emotional. I was surprised.”