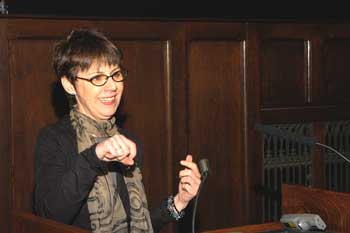 History professor and author Bernadette McCauley, Ph.D., speaks at “The Women Religious and the Shaping of New York Catholicism.”
Photo by Ken Levinson

Hospitals created and run by Roman Catholic sisters in 19th century New York defined the standard of today’s Catholic hospital and left a lasting legacy on modern health care, said a historian in a lecture commemorating the 200th anniversary of the New York Archdiocese.

The Sisters of Charity founded the first Catholic hospital in the New York Archdiocese, St. Vincent’s Hospital, in 1849 as an alternative to the two existing secular charity hospitals, said Bernadette McCauley, Ph.D., associate professor of history at Hunter College and author of Who Shall Take Care of Our Sick? (John Hopkins University Press, 2005).

The sisters proved so adept at what they did that by 1898, more than half of all private institutions in New York City were “sister-managed” hospitals.

“American historians who study American reform have, for the most part, ignored American sisters,” said McCauley, who spoke April 10 on the Rose Hill campus. “But their model went a long way toward making the hospital modern. They didn’t just participate in the modernization; they propelled it. Theirs was a deliberate effort to legitimize the [Catholic] institution on many levels.”

In a time when rising immigrant populations led to increased poverty, outbreaks of disease and social stratification along ethnic and religious lines, the sisters mobilized the faithful to develop and support hospitals that became successful business and community models, McCauley said.
The sisters’ holistic approach to serving communities inspired a whole nursing reform movement that moved the field from “household” care (treating fevers and bandaging wounds) to “acute” care (medical interventions such as surgery) in a standardized way.

“They never officially learned how to manage, but they knew how to be a sister, and the training they learned translated well onto the hospital floor—order, chain of command, attention to detail, cleanliness,” she said. “All of that would become the hallmark of modern professionally trained nurses; but when they did it, it was in no way the standard.”

Besides nursing, cooking, cleaning and offering spiritual comfort, the sisters acted as administrators and fund-raisers, McCauley said. Their facilities were popular among doctors as places to bring patients. Their religious mission strengthened their resolve to serve those in need.

The 19th century sisters of the New York Archdiocese, who numbered in the thousands, were part of a trans-Atlantic movement among Catholic women in which they left a cloistered life to work outside in communities, McCauley added.

“The women who chose this life were still committed to the traditional religious life of community and spirituality, but this was ‘active’ sisterhood,” she said. “Catholic activism is a term most usually applied to efforts with a political end, but through the activism of the sisters, the church in New York wielded enormous influence in [other]areas. These women were instrumental in creating a Catholic New York.”

The lecture, “The Women Religious and the Shaping of New York Catholicism,” was part of the Bicentennial Lecture Series sponsored by the Archdiocese of New York and the Francis and Ann Curran Center for American Catholic Studies at Fordham.