skip to main content
Return to Fordham University
You are at:Home»Inside Fordham»Religious Movements’ Entry into Political Sphere Gets Close Attention 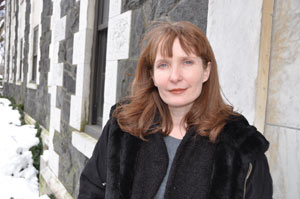 In recent decades, religious organizations have increasingly been entering into partnerships with governments to oversee a vast array of social programs. These new connections are leading Evelyn Bush, Ph.D., assistant professor of sociology, to ask questions about power and individual rights.

“I’m interested in the shifting boundary between religion and state, and the historical circumstances that allow for religion to exert more influence in politics,” she said. “What leads religions to have more or less power? What are the consequences in people’s day-to-day lives?”

To understand this, Bush, who is also associate chair for graduate studies, focuses on religious engagement with large institutions. Recently, she trained her sights on the U.S. State Department, where instances of religious persecution have been documented since Congress passed the International Religious Freedom Act in 1998. Although the social movement leading up to the bill’s passage focused heavily on protections for Christian missionaries, the State Department’s documentation covers a far greater diversity of religious groups around the world.

Bush noticed that, in reports on religion-based violence, a pattern emerges. Abuses of individuals are classified as violations of “religious freedom” if they are committed by governments or by external religious groups. When they are committed by individuals within a religious community, however, they are still classified as violations of human rights, but they are more often covered in the “secular” human rights reports, and referred to more in terms of “culture” rather than “religion.”

This is consistent with a more general pattern that Bush sees in our social discourses. “If you bring up a practice that—by western standards—is considered a violation of human rights, people are quick to say, “Oh, but that’s not due to religion, that’s their culture.” she said. “Why are people so quick to protect the religion from taking responsibility for whatever this practice might be, when we all know that religion and culture are pretty closely intertwined? What exactly is at stake when we make these distinctions?”

One thing to remember about the “it’s their culture” argument, she said, is that there’s an underlying assumption—sometimes explicit and sometimes implicit—that people who are participating in their cultures are doing so consensually. “But it’s difficult to talk about consent and choice for women if they are born into religious environments where, through generations, religious beliefs and practices have been predominantly interpreted by men,” she said. “Assumptions about choice become especially problematic in religious cultures where women are denied scriptural authority at the same time that they are not free to simply change their religions.”

People need not look outside of the United States to find religious groups attempting to exercise authority over others, including working to influence government policy, she said. Same-sex marriage, for instance, is a topic on which domestic religious groups have focused a great deal of attention. In these cases, “Religious organizations involved in politics are not aiming to convince people to adhere to their religion through persuasion, speech or soft power tactics. They’re trying to get people to conform to their principles by harnessing the power of the state,” Bush said.

“I’m opening up a broader question about what the full implications are of this movement,” she said. “The relationship between religion and government has always been there, but these increased efforts to move into the public sphere raise questions about who has power in political processes.”

One way to look at the behavior of religious movements, she noted, is through a framework known as the religious economies model, which starts with economic assumptions about human behavior, including religious behavior.

“This is not to say that I think religions are intrinsically similar to material goods. Rather, I like the market model because it helps us to think about religions as not only having a spiritual component, but also being competitive and having an interest in expanding,” she said.

The aftermath of the Haitian earthquake, which has caused tension between various charitable groups that traveled to Haiti to help, provides a good example of what sometimes happens when a “market” becomes open to new competitors.

As Bush noted in another forthcoming paper, “U.S. Foreign Policy and Religious INGO Participation in Human Rights,” classic missionary organizations are no longer as prevalent as they once were, because now they take the form of nongovernmental organizations (NGOs).

“They’re neither just missionaries nor just relief workers,” she said. “They’re this hybrid form of organization,” and they vary widely in their approaches to evangelizing.

Bush notes that, to understand competition, it is still important to consider the state, and the kind of “religious freedom” that states encourage. U.S. policy encourages competition in a free market ofideas.

“If we take the individualist model of religious freedom, in which everyone opens their religious markets to allow free conversion and evangelism, that leads to an interesting economic question: What type of religion is the most likely to succeed in that kind of setting or market?” she said.

“An institutional economic sociologist would say that the groups with the greatest resources would prevail. In many countries, Christians benefit from open religious economies, because they’ve got media, schools, churches and other institutions through which they disseminate their norms. So they have an advantage in countries that are opening their religious markets.”