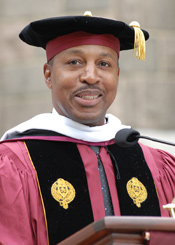 In all, the University conferred bachelor’s, master’s and doctoral degrees on some 4,780 students in fields ranging from anthropology to social work—and many of those students broke into loud cheers when Randolph, who delivered the Commencement address, took to the podium.

“I never gave up; if I’d given up, I’d never be at Shea Stadium,” said Randolph, who interviewed for managerial jobs in Major League Baseball 11 times, and was rejected every time, before he was hired as manager of the Mets in November 2004. “If I’d listened to critics along the way, who knows where I’d have wound up. Keep fighting back like I did. Quitting is the easy way out. Whatever your goals in life, it is imperative that you stay focused, determined.”

Randolph’s address at the University 162nd Commencement was particularly special for him because the ceremony included his daughter Ciara, who graduated from Fordham College at Rose Hill. The occasional misting of rain did nothing to dampen the spirits of the wildly enthusiastic graduates and more than 10,000 family members and friends.

Joseph M. McShane, S.J., president of Fordham, told the graduates that they “sparkle with talent” and possess “an embarrassment of riches—the riches of strong and supple minds and great and generous hearts. 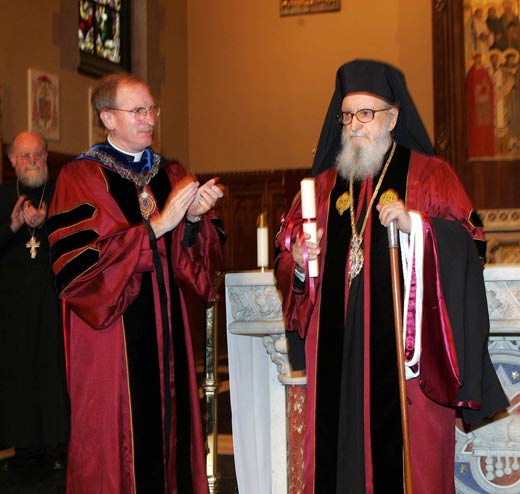 Joseph M. McShane, S.J., president of Fordham, applauds His Eminence Archbishop Demetrios, primate of the Greek Orthodox Church in America, after presenting him with his doctorate of humane letters, honoris causa.
Photo by Bruce Gilbert

“On this day of days, the day on which you are rightly celebrated, I want to remind you [of the]biblical quotation … ‘Of those to whom much is given,’—and that would be you—‘much is expected.’ … The God who lavished so much care on you, the University that is proud to claim you as its own and the world that longs for justice all expect that you will lead lives worthy of your own talented selves and the gifts that you have been given: lives marked by self-emptying love, selfless service and the wise use of the transforming wisdom and knowledge that you have gained here at Fordham.”

Randolph, who led the Mets to within one game of the World Series last year, also had an accomplished 18-year playing career, mostly with the New York Yankees.

“As a youngster growing up in the projects in New York, I faced many challenges in pursuing my dreams,” Randolph said. “I grew up in a tough neighborhood. I grew up around alcohol and gangs, but I had people who cared about me and helped me set my compass in the right direction and achieve my dreams.” 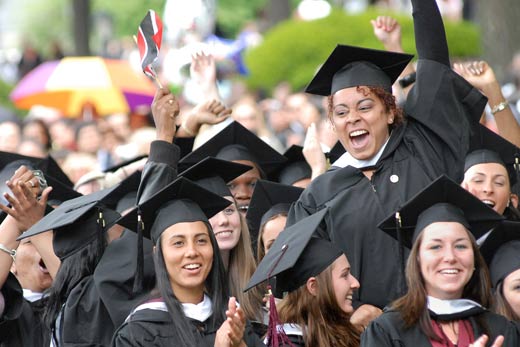