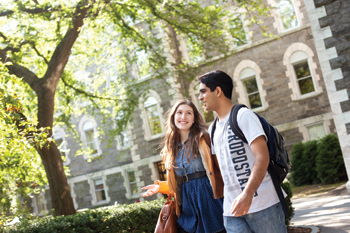 FCRH is at a moment in time when dramatic advances are possible. In particular, while building on its longstanding strengths, the college can take major strides forward in three crucial areas:

• The advancement of undergraduate research

• The development of the sciences

FCRH has already achieved significant steps in these areas through the targeted use of discretionary funds, renewed engagement of faculty in curricular innovation and facilities renovation, and the creation of programs. In the years ahead, additional gains in student research, innovations in the sciences, and new opportunities in international education will enable FCRH students to realize their full potential.

The following is a brief overview of the three major areas of focus for FCRH, including progress attained thus far and additional steps to be taken. Major advances in these three areas promise to significantly strengthen the college, amplifying its national reputation and improving its ability to recruit and retain the very best students and faculty.

Area of Focus: The Advancement of Undergraduate Research

At the nation’s best liberal arts colleges, undergraduate research is not reserved for an elite few. It is an integral part of the curriculum and the academic culture, providing students with the resources they need to discover hidden talents, discern new interests, and distinguish themselves as they prepare for professional life. FCRH has launched major new initiatives to promote research among students and faculty from all academic disciplines.

The FCRH Research Grant Program. In 2010-2011, FCRH drew on discretionary funds to support a total of 119 student-faculty research projects, allocating $303,647.

Among the results of this effort, most notable were the following:

The FCRH Undergraduate Research Symposium. The FCRH research symposium continued to grow. In 2011, an impressive 193 students from across the humanities, the social sciences, and the sciences participated, a 128 percent increase over 2010.

The Fordham Undergraduate Research Journal (FURJ). In 2011, FCRH published the inaugural issue of its undergraduate research journal, which featured the work of 14 highly talented students.

This is a remarkable record, especially for a program that has only been made a top priority in the past year. FCRH now seeks to continue developing a first-rate, comprehensive undergraduate research program. In turn, this effort will strengthen the admissions pool, give students greater advantages in gaining admission to outstanding graduate and professional programs, and increase FCRH’s ability to compete for prestigious fellowships and scholarships.

Area of Focus: The Development of the Sciences

A superior liberal arts college requires excellent science programs, yet the state of the sciences at Fordham College at Rose Hill demands improvement. Students and faculty have accomplished a great deal, but further progress will require innovations in curriculum, the development of new interdisciplinary programs, full use of the University’s external partnerships, and improvements in facilities that are firmly linked to enhanced pedagogy. In the past year, FCRH has made major efforts in the following areas.

The Science Education Committee and Science Chairs Council. The Science Education Committee, chaired by Donna Heald, Ph.D., includes representatives from each of the science departments at Rose Hill and Lincoln Center. Its charge focuses on the need to: identify best practice models in undergraduate science education; make recommendations regarding lab and classroom renovations; consider ways in which existing graduate programs can support undergraduate science; improve communication across the sciences; more effectively use external partnerships; define goals for undergraduate science, including benchmarks and timelines; and formulate an assessment plan. Through the work of this committee and regular meetings of the Science Chairs Council, FCRH has now undertaken a major effort to engage in essential longer-term planning for the sciences.

New Program in Integrative Neuroscience. Faculty from the Departments of Biology, Computer Science, Natural Science, and Psychology are now planning a new interdisciplinary program in integrative neuroscience. This program will be of major interest to students in the sciences and the pre-health program and allow FCRH to take a step already attained by most peer institutions.

Facilities Renovations Linked to Innovations in Pedagogy. Based on the projected capital funding of roughly $2 million per year, Michael Latham, Ph.D., dean of FCRH, and Donna Heald are guiding systematic renovations of the college’s science facilities for the next five years. As part of this process, renovation projects will be directly linked to pedagogical goals.

Further Development of External Partnerships and the Calder Center.
In the past year, FCRH faculty and students have made significantly greater use of the University’s external partnerships, including research at the Albert Einstein College of Medicine, laboratory sites at the New York Botanical Garden and the Bronx Zoo/Wildlife Conservation Society for ecology and introductory biology courses, and participation in new early acceptance agreements with New York Medical College (NYMC) for Speech Language Pathology and its highly ranked Doctor of Physical Therapy program.

As a liberal arts college within a Jesuit university in one of the world’s greatest cities, it is most fitting that FCRH should make international education a high priority. Its advancement, moreover, will be essential if the college is to fulfill its mission to educate global leaders as defined in the University’s strategic plan. During 2010-2011, efforts focused on the following:

Expanded Foreign Language Offerings. In collaboration with the Department of Modern Languages and Literatures and the dean of Fordham College at Lincoln Center, FCRH secured the creation and approval of minors in Mandarin Chinese and Arabic.

Study Abroad Opportunities. In collaboration with the University of Pretoria, FCRH and the Office of International and Study Abroad Programs have created a new service learning program in South Africa. The first contingent of students will take courses at the University of Pretoria in the spring of 2012, working on community service projects under the guidance of the Jesuit Institute of South Africa.

In the coming year, FCRH will also seek additional ways in which international education can be strengthened via curriculum improvements. The new minor in International Humanitarian Affairs at Lincoln Center has started very well, and approximately half of the students enrolled in the program’s introductory course this year were FCRH students. In the coming year, FCRH will explore the ways that its program in International Political Economy can be promoted as well.

Fordham College at Rose Hill
At a Glance

Prestigious fellowships and awards: 53
compared to 39 and 26 in the two previous years, respectively