Fordham College at Rose Hill (FCRH) provides an excellent liberal arts education in the Jesuit tradition, distinguished by the high quality of its dedicated faculty; the rising qualifications of its entering classes; the impressive accomplishments of its graduates; the vibrancy of its integrated learning communities; its Honors Program; its engagement with New York City; and a rigorous core curriculum. 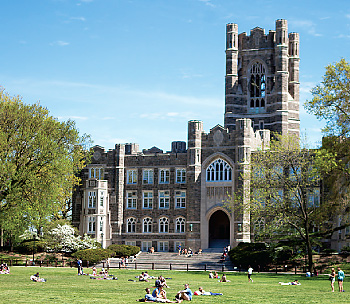 In 2012-2013, the college made significant progress on four primary goals in accord with the University’s strategic plan, Toward 2016:

• To advance the college’s commitment to University mission, resources, and planning
• To infuse the academic curriculum and culture with new energy and quality
• To promote distinctive programs
• To advance advising and retention of FCRH students

To guide the work of the college, the FCRH dean consulted with the provost and collaborated with the College Council, the Dean’s Budget Planning Committee, the United Student Government Dean’s Academic Council, and the FCRH Board of Visitors to draft an operational plan. The plan was framed in accordance with Toward 2016, the work of the Strategic Plan Review Committee, and President Joseph M. McShane, S.J.’s Response to the Committee. Intended to provide operational direction for the college starting in the fall of 2013 and concluding in the spring term of 2016, it will be replaced by the new University and college strategic plans once they are prepared.

To further strengthen the college’s Jesuit identity, the FCRH dean collaborated with the Jesuit Community to continue the Arrupe Seminar for a second year, strongly increasing the faculty enrollment in it. The seminar provides a valuable opportunity for members of the college community to read and discuss texts in Jesuit history, spirituality, and educational philosophy and to reflect on how they live the mission of the University in their daily work with colleagues and students. The college also strengthened the mission-oriented commitment and programming of its Integrated Learning Communities (ILCs), and the dean met with the rector of the Jesuit Community to plan ways for students to have greater contact with the Jesuits living at Rose Hill.

FCRH made additional progress in securing vital resources, raising its total in the University’s capital campaign to $28.2 million and further surpassing its original goal of $25 million. The dean worked with the Office of Development and University Relations (DAUR) to place the Science Council on stronger footing with an active board, regular communication to alumni, and an engaging calendar of events to promote alumni philanthropy. The fall Science Council Lecture by Dr. Ronald DePinho, FCRH ’77, president of the M.D. Anderson Cancer Center, was an especially compelling event, drawing a very large audience to the University Club. In the coming year, the dean plans to further expand the membership of the Board of Visitors.

During the past year, the college managed the full and successful implementation of the liberal arts core curriculum, ensuring that sufficient upper-division core offerings, including the new interdisciplinary capstone course, advanced disciplinary courses, the third Eloquentia Perfecta course, and the Senior Values course were available for students. Seventeen new faculty members in the Arts and Sciences brought outstanding teaching experience, scholarship, and sponsored research portfolios to Fordham and will help to raise the percentage of courses taught by full-time faculty.

Committed to the success of its Integrated Learning Communities, FCRH faculty and staff led a large number of colloquia, retreats, and trips into New York City for Queen’s Court, Campbell-Salice-Conley, the Science Integrated Learning Community, and the “West Wing” in O’Hare Hall. The Manresa Program was particularly active, with some of the college’s most dynamic teachers offering eight seminars, serving as freshman advisers, and supporting a full calendar of excursions, retreats, community dinners, spiritual reflections, a debate series, and writing workshops.

Science programs remained an important curricular focus as well. The New York State Education Department approved the new major in integrative neuroscience which is being offered for the first time in fall 2013. Renovations designed to enhance science pedagogy dramatically improved the introductory biology teaching labs. An engineering physics lab in Freeman Hall and new space for collaborative research in computer science by students and faculty in John Mulcahy Hall were also created. Benefiting from the new Bronx Science Consortium, FCRH students pursued expanding research opportunities at the New York Botanical Garden, the Wildlife Conservation Society, and the Albert Einstein College of Medicine, and assisted physicians through a new program at the Montefiore Medical Center.

To prepare graduates for success in an increasingly interconnected world, FCRH maintained a strong commitment to international education. For the first time, incoming international students participated in an expanded academic orientation designed to help them make the transition to Fordham. The Fordham London Centre launched its first Liberal Arts Semester, and the Ubuntu Program in Pretoria, South Africa, enjoyed a successful second year, integrating academic courses with community-based service and learning in townships outside the city. Overall, the college’s participation in study abroad continued to rise. During 2012-2013, 363 students studied abroad, a major increase in relation to the 279 who studied abroad the previous year, and the 255 in 2010-2011. The share of students participating in full-term programs of a semester or more in length also increased.

FCRH emphasizes innovative teaching across all disciplines and plans to expand a grants program to support faculty attendance at conferences on pedagogy, bring in external consultants to lead departmental teaching workshops, and invest in new technology to enhance the classroom experience. In particular, FCRH will promote curricular advances based on projects in the digital humanities and new, inquiry-led science pedagogies. The college has also partnered with the University Library, the Department of English, and several outstanding faculty to launch a new pilot program to enhance students’ information literacy and research ability in selected Eloquentia Perfecta courses.

Culture of Research and Achievement

Building on an effort launched four years ago, FCRH has achieved its goal of making undergraduate research an integral element of the college’s culture. In 2012-2013, FCRH drew on alumni donations and Mellon Foundation funds to support 98 student projects, distributing $237,000 in grants. A remarkable 337 students from across the academic disciplines participated in the college’s Undergraduate Research Symposium, an increase of 23 percent over the previous year, and FCRH collaborated with Fordham College at Lincoln Center (FCLC) to publish the third issue of the Fordham Undergraduate Research Journal. As in the past two years, external outcomes were especially impressive as 16 students co-authored articles in professional journals and delivered or co-authored 49 presentations at regional or national conferences. These achievements will enable graduates to be more competitive in seeking admission to graduate and professional schools, and the FCRH undergraduate research program is now attracting interest among prospective students.

FCRH students in the college’s pre-professional advising programs achieved noteworthy success as well. Supported by a dedicated faculty and a very active Committee on the Health Professions, 83.3 percent of FCRH applicants gained admission for fall 2013 to doctoral level medical and health professional schools. The college’s three-year average now stands at 83.1 percent, far surpassing the national average of approximately 45 percent. The FCRH pre-law program expanded to include advanced course offerings in addition to the symposium for new students, and graduates excelled here as well. All of the Class of 2013 pre-law advisees gained admission to law school, many with acceptances to the nation’s best programs, including those at NYU, Duke, Georgetown, Boston College, and Fordham. FCRH also expanded its advising program for students seeking admission to graduate school in the arts and sciences and business fields.

During 2012-2013, FCRH defined a comprehensive approach to retention, putting in place strategies intended to improve retention and graduation rates. The college’s new director of retention and student success supported FCRH faculty and staff and coordinated with other areas to provide additional advising and counseling to students experiencing academic, health, and financial challenges. FCRH will seek further improvements through a “Core Advising Plan” designed to fully integrate freshman, sophomore, and transfer student advising. FCRH will also work directly with the Office of Career Services to incorporate orientation and career planning workshops into the advising model.

The 2012-2013 academic year was a very successful one for the college. FCRH looks forward to further advances, continuing to raise its profile, recruit and support excellent faculty and students, and promote the wider mission of the University.

Prestigious fellowships and awards: 42
compared to 41 and 53 in the two previous years, respectively

All Doctoral Level Health Professional Schools (US and Non-US): 88.4 percent