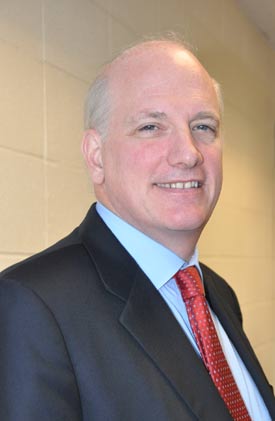 Long before the fall of Lehman Brothers, Bear Stearns and AIG, Robert Hurley, Ph.D., (CBA ’78) was researching ways to combat the pervasive distrust of institutional leaders.

As a doctoral student under the tutelage of conflict resolution expert Morton Deutsch, Hurley focused on factors that cause trust and those that lead to suspicion. But it was an MBA student who made Hurley realize there was work to be done in the area of trust in leadership.

“Eight years ago, there was a student in the program from one of the large financial services companies who took issue with the idea that trust could exist in organizations,” said Hurley, a professor of marketing and management in the Graduate School of Business Administration. “He felt that it was naïve to trust leaders in organizations because you would make yourself vulnerable. That intrigued me—that he didn’t even think loyalty and trust could exist. That’s how far we had fallen from effective leadership.”

As it turned out, the student was right.

“The company he worked for went bankrupt and the CEO walked out with millions of dollars,” Hurley said. “That’s when I became even more interested in researching trust, and found that without trust, one cannot run an effective organization.”

Hurley defines trust as being comfortable with putting yourself in a position in which someone else controls the outcome. When there is uncertainty and risk of injury, trust becomes more of an issue.

“That’s one reason why trust is such an issue today—there’s more uncertainty,” he said.

Hurley surveyed 450 executives from 30 companies around the world in 2006 and uncovered some grim findings: roughly half of all managers don’t trust their leaders.

Another survey Hurley referred to for an article in the Harvard Business Review in 2006 found that 69 percent of respondents agreed with the statement “I just don’t know who to trust anymore.”

This obviously doesn’t bode well for organizations, Hurley said, because it can affect employee loyalty.

“If you don’t trust your leader, you’re not going to follow in a very committed manner,” Hurley said. “Trust is absolutely essential to leadership.”

While much of the scholarly research had reported the lack of trust, Hurley noticed there was little information to help leaders develop a better understanding of trust. So he set out to create a model that explains the mental calculations people make before choosing to trust someone.

“Clearly, companies that foster a trusting culture will have a competitive advantage in the war for talent,” he said. “Who would want to stay in a stressful, divisive atmosphere if offered a productive, supportive one?”

According to Hurley’s model, people weigh 10 basic factors when deciding whether to trust someone. Three relate to the decision maker alone—the “truster”—and seven reflect the specific situation involving him or her and the person asking for trust—the “trustee.”

For example, trusting someone could be affected by decision-making factors such as how risk-tolerant they are, or how much relative power they have. Other factors are more situational, such as a the dimension known as “benevolent concern.”

This, he said, is where financial services companies broke down.

Those leaders had an incentive to increase revenue by selling risky products. It was in their interest. They got bonuses to do that. It was not in the interest of stockholders or employees who weren’t getting million-dollar bonuses. So there was a misalignment of interest, which created a trust issue.

So what can organizations do to build trust, especially in the current climate of economic uncertainty? Hurley is addressing those ideas in a book, Restoring Trust, which is due out next year.

“The first thing is to create alignment of interest throughout the organization—among leaders, employees and stakeholders—to make sure that there’s a clear strategy; vision and alignment around that strategy; and vision among stakeholders,” he said. “Second is to create a culture that has a common set of values. Part of that culture should include openness and communication, transparency and benevolent concern—caring for employees as humans and not just agents of profit.”

Students in the classroom are a source of inspiration.

“It’s a good example of the interplay between scholarship and teaching. When you have conversations with students that pique your interest, the scholar in you tries to understand and go deeper. That informs your teaching,” he said. “It’s a virtuous cycle.”

Hurley’s work is also a way to shape the next generation of leaders.

“Leading and managing based on some set of values tend to be important. With Fordham being a Jesuit school, this idea of men and women for others fits right in,” he said. “If we educate men and women for others, they will think about other people’s interests, not just maximizing their own financial reward. Because of that, they’ll have more followers, which will make them better leaders.”