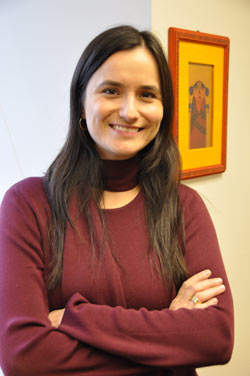 Viviane Mahieux, Ph.D., says the writing of Cube Bonifant presents a valuable portrait of life in Mexico after the revolution.
Photo by Gina Vergel

It was challenging for a woman to become a respected journalist in Mexico during the early 20th century. So when Cube Bonifant landed her first newspaper column at age 17, she wrote in a way that would ensure attention in an industry dominated by men—with irreverence, unpredictability and humor.

Bonifant, a controversial writer who wasn’t afraid to poke fun at Mexico City’s literati and high society, churned out more than 2,000 livelycrónicas, or feature columns, and film reviews throughout her career. Viviane Mahieux, Ph.D., assistant professor of Spanish, has compiled and edited the first collection of Bonifant’s columns.

“Bonifant died in 1993, yet there were 50 years of silence,” said Mahieux, who wrote an introduction to the book. “She completely distanced herself from writing and public life. That makes her somewhat of an enigma and, for me, even more interesting.”

Mahieux, who earned her doctorate in romance languages and literatures from Harvard, stumbled upon Bonifant’s writing in 2001 while researching her dissertation on the chronicles of Latin American writers Robert Arlt, Mário de Andrade and Salvador Novo.

“I had to share her work, because she was very funny,” Mahieux said. “I found myself laughing on my own in the archives of the libraries. People around me were probably wondering if something was wrong with me.”

Mahieux pored over archives of Mexican newspapers and literary journals such as El Universal Ilustrado, El Mundo and El Democrata to find choice Bonifant columns. She also spent time with two grandnieces of Bonifant, who had no children.

In Bonifant’s writing, Mahieux learned what it was like to be young, opinionated and carefree in Mexico City after the Mexican Revolution. Consider this sentence from her first crónica.

“I am a girl of 17 years, perfectly happy. Very temperamental, versatile and deep down, capable of being formal.”

Born in 1904 in the western Mexican state of Sinaloa, her given name was Antonia Bonifant. Rumor has it that as a little girl, she could not pronounce the usual greeting, “Que hubo?” and instead pronounced it “Cu-be.” The mispronunciation became her nickname.

When the revolution started in 1910, Bonifant’s family moved to escape the violence—first to Guadalajara and later to Mexico City. Her father, who was of French descent, was a mining engineer and the family was considered upper middle class. Bonifant was very well read and educated mostly at home, Mahieux said.

The female members of the family arrived in Mexico City in 1921 ahead of the men, and there was a need for someone to work to keep the family together. That’s when Bonifant got her first writing job for El Universal Ilustrado.

“She became a public figure affiliated with modernity—media, the press and with film,” Mahieux said. That first year, Bonifant starred in a silent film directed by Carlos Noriega Hope, La gran noticia(1921). The movie, which starred only journalists and writers, flopped, so much so that Bonifant began poking fun at the art of acting.

“She said she hated to act, having to get up early only to ruin her skin by wearing ‘that cake makeup,’” Mahieux said.

In the early 20th century, it was unavoidable for a female journalist to be labeled anything but a writer for women.

“The sections in which she published were always extremely feminized. Her first column appeared under the heading, “Sólo Para Mujeres,” or “For Women Only,” Mahieux said.

She subverted the heading the only way she could—by directing the column to men. “She wrote, ‘I know since this column is titled ‘For Women Only,’ men read it,’” Mahieux said. “She directs it to them, beginning, ‘Queridos señores,’ or ‘Dear sirs.’”

Bonifant was one of the first woman writers in Mexico who would not write about the home or domestic matters in any way, Mahieux said. “She was quite the young flapper. She smoked. She had short hair. She went to cabarets and soccer matches and loved bullfighting.”

Bonifant also had no qualms about picking fights with Mexican intellectuals and public figures. In a column about dinner parties for those in Mexico City’s literary scene, Bonifant poked fun at guests who spoke French to show off, drank wine and endlessly flattered each other.

“Ernesto García Cabral,” she wrote, “is a perfect example of someone who will give an endless speech as soon as he grabs a glass of wine,” implying that this caricaturist for the daily Excélsior was incredibly boring.

“In retaliation, García Cabral started devoting terrible caricatures to her. In one, he implied she kissed all the men in Mexico, which made for a very interesting back and forth,” Mahieux said.

Skirmishes like that prevented Bonifant from fully developing her voice as a writer, she said.

“One of the strategies that she used repeatedly was to critique other women or different norms of femininity, and to take on an ironic masculine voice,” she said. “That didn’t leave her too many options [to develop as a writer]and it was a bit self-defeating.”

This could be a reason why Bonifant, writing under the pen name Luz Alba, willingly jumped into film criticism, Mahieux said.

“Cube’s work shows us what it was like for a woman to negotiate a space in the pages of a newspaper, then a gender-laden environment,” Mahieux said. “She gives us a new and valuable perspective on Mexican culture in the early 20th century beyond what is considered literary.”