skip to main content
Return to Fordham University
You are at:Home»Inside Fordham»Professor Decodes the Post-Mortem Adventures of Eva Perón 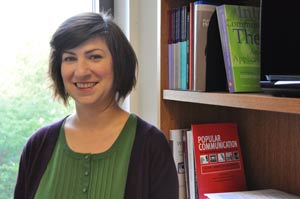 For Margaret Schwartz, Ph.D., the study of communication and media in the 21st century is akin to another academic discipline—philosophy.

“Some questions that we think of as purely philosophical actually have great resonance in communication—ones like, ‘What is reality?’ ‘What is the nature of the self?’ and ‘What is perception?’” said Schwartz, an assistant professor of communication and media studies.

Pondering such questions is her forte, particularly in regard to media presentations of the human body. She has published on how tabloids depict celebrities—such as Britney Spears and Paris Hilton—as an amalgamation of body parts, but not as whole humans.

The larger part of her research, however, is on the embalmed corpse of Eva “Evita” Perón, the former first lady of Argentina, who has been preserved since her death in 1952. “How does this corpse interact with ways of duplicating someone’s image, like a photograph, or ways of storing memory, like a record album?” Schwartz said she wants to know.

Because of the enormous impact of Evita on Argentina’s history and politics, the corpse functions as the physical locus for a range of emotional, political and cultural affectations, Schwartz said. But does the corpse represent death, or does it mediate between lived experience and the knowledge of death?

Schwartz argues that the communicative structure of the embalmed corpse is an archive where cultural representations of death are stored, and from which they are redeployed.

“Embalming changes the subject in a way, but more than that, it has a lot in common with certain kinds of more typical communication media, like the photograph,” she said. “They use an embalming solution that chemically alters the material so as to preserve it, which is similar to the photograph in the relationship between the object and what it represents.”

Applying philosophical questions to a communication medium like the photograph, Schwartz asked, “Is it its own thing, or does it only exist insofar as it points back to something else?

“What a photograph shows—say, a flower—does not last as long as a photograph of a flower, and is not as easily portable,” she said. “You have the same problem with this corpse; it relates back to this historical person, who is a wildly contentious figure in Argentine history, and yet it also has its own history.”

For Schwartz, mediated representations connect back to what they represent and, at the same time, are free from them. She explained that a person cannot talk about Perón’s corpse without talking about the historical person Eva Perón. The second wife of Argentine president Juan Perón, Evita was a powerful—though unofficial—political leader. Born into poverty, the former actress was instrumental in the success of his first presidential campaign and won the adulation of the masses.

“She was his mistress before she was his wife, but she then became the bridge of love between him and the people,” Schwartz said.

After Eva Perón’s death from cancer at age 33, her grief-stricken working-class followers sought to have her canonized with no success. Instead, she was embalmed and that is where the story of the corpse begins.

“The urge to preserve the body is very much in keeping with this idea of a modern saint and the idea of solidifying a new social order for Argentina. But the idea fails, and Juan Perón gets overthrown,” Schwartz said. “The body is then stolen from the embalmer because it would become a site of pilgrimage for people that really supported her. It stays missing for 20 years.”

At around the same time, former Argentine president Pedro Eugenio Aramburu was kidnapped and executed by guerrillas, who refused to return his body until Evita’s corpse was returned to “the people.” Aramburu was among the few who knew where Evita’s body was. Soon after, Evita’s corpse was exhumed from a secret gravesite in Italy and delivered to Juan Perón.

“So this stolen embalmed corpse is re-appropriated by a whole new generation using it as a touchstone to understand who Perón is now,” Schwartz said, adding that analysis of the embalmed corpse after it was returned uncovered that the body was mistreated while it was missing.

For that reason, Schwartz argues embalming should be considered its own kind of communication.

“The ethics of how that body was treated was really different,” she said. “If it was a photo or statue, they could have thrown it away. Argentina is a very Catholic culture and it would have been a sin to cremate it. They saw themselves acting in the light of history and didn’t want word to get out that they had done this, so it was covered up.”

But once that mistreatment was uncovered, Schwartz said, Evita became even more of a symbolfor the people.

“It’s a way in which she stands in for them,” she said.