skip to main content
Return to Fordham University
You are at:Home»Faculty Profiles»Professor Challenges Students to See Transformative Powers of Architecture

In the heart of Manhattan’s Lower East Side, a 12-story, two-year-old residential building sits at the corner of Houston and Pitt Streets, looking every bit like one of the new luxury towers that have sprouted in the
area in the last decade. 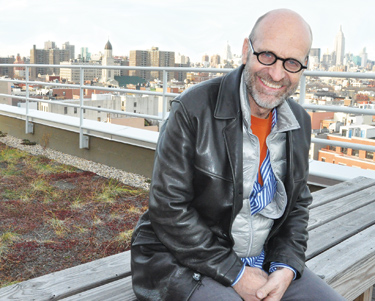 Colin Cathcart takes in the view on the roof deck of The Lee, a LEED Gold residence for the formerly homeless on the Lower East Side.
Photo by Patrick Verel

However, The Lee, as it is known, has more in common with the nearby Hamilton Fish public housing project, as the LEED Gold building provides affordable housing for 264 formerly homeless adults and at-risk youths.

It is also the latest project from Colin Cathcart, M.Arch, an associate professor of architecture at Fordham. Cathcart’s firm, Kiss + Cathcart, designed The Lee, which boasts a rooftop garden and deck, super-efficient heating and cooling systems, and an interior layout conducive to socializing. Run by Common Ground Community, Inc., it is the kind of project whose challenges Cathcart shares with students in Fordham’s pre-architecture, environmental studies, and urban studies programs.

“In architecture, there is a three-dimensional puzzle-solving aspect, which a lot of people really don’t understand,” he said during an interview in his firm’s office, which is ensconced in a cupola atop a downtown Brooklyn skyscraper.

“There’s this completely different mode of thought, which is to get inside a problem and actually see it spatially. That’s really what I try to bring to my students, to make them approach problem-solving in that same way, although I assign the students problems that are much simpler, more academic and intended for skill-building.”

Cathcart started doing double duty in private practice and academia in 1988 at the City College of New York, and has been at Fordham since 1997. The University is a great fit for what he does, he said, because the open-ended nature of architecture makes the subject appealing to students from a wide array of disciplines.

“It’s actually a pretty nice fit for a Jesuit university, because you really do have to focus on the individual. You can’t just lecture the class; you have to understand and help every project in a different way, because the project on every desk is different.”

In addition to The Lee, Cathcart’s other most recent project is the Department of Environmental Protection’s Remsen Yard Maintenance Facility in Canarsie, Brooklyn. At 2.5 acres, the repair and supply facility for the fleet of trucks that maintain the city’s sewer system is so big that a street had to be eliminated to accommodate it when it was built in 2011. What makes the facility unique is a massive roof that harvests both solar energy and rainwater, the latter of which is used to wash the trucks at the end of the day. This saves potable water from being used for non-potable purposes.

Cathcart’s smaller projects include Solar 1, a solar-powered classroom alongside the East River which remained in operation after Hurricane Sandy; and a two-family house in Gravesend, Brooklyn that collects solar heat in the winter and rejects it in the summer.
For Yale University’s Coxe Cage, a track and field house built in 1928 that often becomes too hot inside to occupy in the summer, Kiss + Cathcart has designed an enormous new shading skylight and a new, substantially passive ventilation system.

Cathcart is also involved in the design and promotion of hydroponic gardens on school rooftops, which cut down on food transportation costs and educate students about healthy eating. Many of the technologies the firm embraces are cutting-edge, which in the past meant the firm had to venture outside of New York City for work. That, however, has changed.

“At first we found there was an awful lot more interest in our services in the Far East and the Middle East, California, and Europe. Now we’re doing the vast majority of our work in New York City, partly because it has become conscious of being an environmentally friendly city,” he said.

The challenge to architects is to make the qualities that society values in buildings visible and to express those values physically. Buildings can actually change people’s characters and lifestyles and force them to question their daily habits, he said.

“We’ve done museums before, and it’s actually not very hard to design a very good place for art, it’s really not,” he said.

“What’s hard is to design a really great workplace or a great residence for poor people. That’s a real challenge, and its something we really take pride in meeting.”