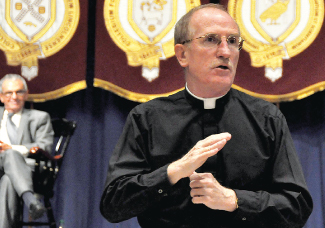 American higher education is threatened by a reductionist perspective that is rightly concerned with tuition and costs, but wrongly focused on certain kinds of outcomes, Joseph M. McShane, S.J., president of Fordham said during the 15th Annual Faculty Convocation on Sept. 12.

“The public, the media, and the government value higher education for two basic reasons: as an instrument for workforce development, and as a force for stabilizing weak economies,” he said in a State of the University address to faculty and administrators that touched on every facet of University life.

Watch lists, report cards, and new methods of assessments are going to be a part of higher education’s near future, he said. Additionally, pressure to add MOOCs (Massive Open Online Courses) and other forms of distance learning to the curriculum is growing.

As part of Fordham’s response, Stephen Freedman, Ph.D., provost of the University, will head task forces to articulate, in a persuasive way, what is the value of a liberal arts education, and how to integrate MOOCs into the curriculum in a way that’s consistent with Fordham’s culture.

“We are entering into a more competitive, more financially challenging, and more closely watched period in the coming years,” Father McShane said. “Therefore, we will have to be ever more creative in the ways in which we educate our students and go about our work.”

Among the achievements Father McShane said Fordham can claim is the near-completion of its capital campaign, Excelsior | Ever Upward | The Campaign for Fordham. After a year in which the University raised $44 million, the total amount raised stands at $498 million. Fundraising will continue until the Founder’s Award Dinner in March 2014, with a goal of raising at least $520 million, he said.

Of the four priorities set forth for the campaign, the University has exceeded the goals set for supporting scholarship endowments and academic programs, but fell short of its goals for capital projects and endowed professorships.

The University has also greatly upgraded its physical plant, he said. At the Rose Hill campus, a $38 million gut renovation of Hughes Hall was completed and a brand new pipe organ was installed at the University Church, paid for with generous alumni donations. At Lincoln Center, the new $250 million Law School building and dormitory is scheduled to open on time, in the fall of 2014, and on budget.

The University’s endowment has hit an all-time high at $621 million, up from $548 million. Father McShane noted that, in spite of a highest-ever endowment and a conservative financial approach, for the first time in recent history the University had to stretch to balance its budget.

One factor was a drop in enrollment in the professional and graduate schools. A contraction in the legal profession and a hesitancy on the part of students to shoulder substantial debt contributed to a 40 percent drop in application activity at the Law School; likewise, the Graduate Schools of Arts and Sciences (GSAS) has struggled with enrollment.

Although demographic changes in the Northeast—where Fordham has traditionally recruited high school students—are making things challenging, Father McShane noted that undergraduate admissions is still strong. The average SAT/ACT score of the incoming freshman class of 1,955 students this year is 1268, up four points from last year.

“Every year, I greet the entering class by saying, ‘Welcome to Fordham; you’re the brightest class in the history of the University.’ I’ve done this 11 years in a row, and I’ve never told a lie,” he said.

Taken as a whole, Father McShane pronounced the state of the University good, thanks to the hard work of the faculty and staff.

“As we go forward, we will work together to make sure that a university that is good, that is strong, that is distinguished in its aims and its work, continues to grow ever stronger.”

Other Fordham achievements include:

• Several schools rose or retained places in this year’s U.S. News & World Reportrankings. The Graduate School of Social Service (GSS) retained its No. 11 ranking in the country, while the Law School rose one place to No. 38 and received solid rankings for several of its programs. In addition, Businessweek named the Gabelli School of Business the 40th best undergraduate business program inthe nation, up from No. 49. The Graduate School of Business Administration likewise moved in U.S. News from No. 89 to No. 79.

• Faculty grant activity and publications continue to boast impressive numbers. Fordham faculty carry $59 million in multiyear grant funding, up 16 percent over last year. The Graduate School of Education, GSS, and GSAS had the largest increases. Across the schools, faculty members published 187 books and 329 articles, and made 1,036 presentations at scholarly conferences.