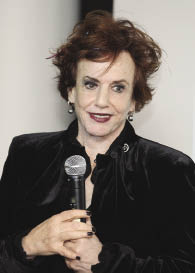 Faith Popcorn foresees the rise of a genderless society—a phenomenon she is calling EN-GEN.
Photo by Chris Taggart

“We are in the midst of one of the biggest shifts in history—the feminization of culture,” trend forecaster Faith Popcorn told a standing-room only crowd as part of the Flaum Leadership Lecture Series.

Popcorn is the founder and key strategist of futurist marketing consultancy Brain Reserve and the author ofClicking (HarperBusiness, 1996) and EVEolution (Hyperion, 2000). She has successfully predicted several trends, including cocooning, the demand for fresh food and the rise in home delivery.

Despite her success, Popcorn told David A. Gautschi, Ph.D., dean of the Graduate School of Business Administration (GBA), that not everyone pays attention to her ideas.

“[Popcorn] said to me earlier that people only appreciate her predictions after things have happened. Maybe tonight we will start thinking about what may be coming down the line and take it a little more seriously,” Gautschi said. “I think we should.”

Popcorn spoke about a phenomenon she called “rEVEolution,” a cultural revolution in which feminine values are adapted and prized. She said she began speaking about the concept nearly 10 years ago.

“The time is now,” she said. “The way that women think and behave is going to start to impact business.”

Popcorn shared statistics about the rising influence of women worldwide. Women hold 51 percent of managerial and professional jobs, and single, childless women under 30 earn 8 percent more than their male peers do.

In this new environment, the business world will benefit from embracing values that are traditionally considered feminine.

Apple, the technology giant, and Nespresso, the Swiss coffee maker, are brands that adapt both male and female attributes successfully. Companies that want to continue to flourish will have to follow that model, she said at the Nov. 3 event.

“Women are very, very rich, and that’s going to make the difference in terms of people listening to what they want.”

The “rEVEolution” also applies to men. Popcorn referenced billionaire investor Warren Buffett, suggesting that he “invests like a girl,” given his tendency to hold stocks for a long time.

She also predicted an impending end to the gender divide, a phenomenon she calls “EN-GEN,” or the end of gender. In this post-gender world, Popcorn said, people will no longer be separated by gender, nor will they invest their energy in fighting cross-gender battles.

She said companies that want to thrive must adapt practices that speak to the values women most esteem, including giving back, transparency, meeting people in their own environments, and having a human touch.

“Feminization of the culture is elevating society’s collective consciousness. It’s going to be a good thing for society,” she said.

Founded by Sander Flaum, adjunct professor of management and chair of the Fordham Leadership Forum, the lecture series provides GBA students with opportunities to connect with notable business leaders.

Flaum said he created the series to distinguish GBA as “the leadership school.”

“What we do here is to inspire, prepare and train the future leaders of the business world, and, boy, do we need leaders now—more than ever,” he said.