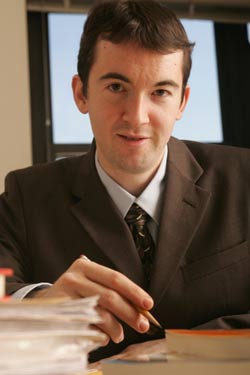 Robert J. Hume, Ph.D., assistant professor of political science, focuses on the use of language in Supreme Court decisions.
Photo by Bruce Gilbert

The saying, “The pen is mightier than the sword,” is often applied to the press. But Robert J. Hume, Ph.D., assistant professor of political science, knows the written word is also the weapon of choice for the least understood segment of the United States government: the courts.

“Hamilton’s argument was that the Supreme Court is a constrained institution, but I think there are some, like me, who will say, no, written opinions are a source of strength,” Hume said. “This resource is potentially powerful, especially because judges have so much legitimacy in the eyes of the public; their written word counts for a lot.”

Hume, who came to Fordham in 2005 from the University of Richmond, has devoted his research to understanding how federal judges, and in particular Supreme Court justices, craft their decisions.

“If you asked the average person on the street how judges make decisions, I think the feeling would be that, most of the time, judges use objective principals, and they’re not just acting on their policy preferences,” he said before adding, “I’m not looking at the relationship between courts and the public though; I’m looking at the relationship between the courts and other elites.”

Hume noted that his attention to the words judges use is unusual. In judicial policy literature, the dominant approach has been drawn from a 1993 book titled The Supreme Court and the Attitudinal Model, by Jeffrey Segal and Harold Spaeth, which puts forth that Supreme Court justices strictly follow ideological preferences when deciding how to rule.

“Maybe a written opinion isn’t going to help you understand how the judge tried to reach a decision,” he said. “But how then does a Supreme Court justice build a coalition of five justices that’s needed for a majority? How does the justice write a persuasive opinion which is then accepted as authoritative and then interpreted in a manner that’s consistent with the justices’ preferences by lower court judges?”

This not a small matter, because judges are ineffective if they cannot convince others to make the changes they prescribe, he said. Since they are suspected of harboring political biases by most of the country’s elite, even members of the Supreme Court must consider carefully which sources to cite and what tone to take in their decisions.

“Judges know that if they’re working with agencies or other judges, it’s not enough to just say, ‘I have decreed authoritatively on high what the law is,’ and expect everyone to be bowled over and say, ‘Oh, of course we accept what you’ve said.’ So more steps are needed to get the point across.”

What kind of steps might that entail? In “The Use of Rhetorical Sources by the Supreme Court,” which Hume published in 2006 in Law & Society Review, he examined the instances when a justice cited documents such as the Federalist Papers, the Declaration of Independence and the Magna Carta. And in his forthcoming book, Words Matter: How Courts Impact Federal Administrative Behavior, Hume opens a chapter with an excerpt from Lewis Carroll’s 1876 poem “Hunting of the Snark,” which was used by the Washington D.C. Circuit Court to defend its judgment in an administrative case involving the Federal Energy Regulatory Commission.

“If I’m an agency, and I see something like that in the opinion, the message that I would get is that this court’s not really pleased with what I’m doing, to the extent that it’s quoting Lewis Carroll poems and making a public mockery of me,” he said. “To the extent I care about that sort of thing, maybe that’s going to make me think twice before I try to defy or evade the court in the future.”

When it comes to areas of research, immigration is the most useful for Hume. Like the Federal Regulatory Commission and the Federal Communications Commission, the U.S. Immigration Agency’s Board of Appeals features widely available public records, and a pattern of decisions being defied by parties involved. It’s not uncommon, he said, for the board to accept a ruling from a judge that allows one person to stay in the country, but insist that it need not abide by the precedent for the next person.

“If you’re studying something like nonacquiescence, you need to have a lot of similar types of cases so you can find out in what circumstances do the agencies accept court decisions as authoritative, and when does the agency not accept court decisions as authoritative,” Hume said. “When you’re studying administrative behavior, and you do quantitative research the way I do, you want to build a data set, so you need to go where there’s data. What’s useful about immigration cases is that for a lot of them, the fact patterns are very similar.”

Despite the agency’s role in red-hot debates, Hume said the U.S. Board of Immigration welcomed him to its offices when administrators realized he was interested in learning about office procedures and not more controversial topics.