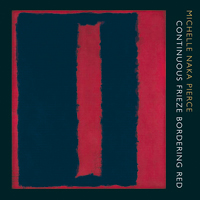 The dark, maroon- and red-infused paintings had an immediate effect.

“When I walked into the exhibit, I had an extremely visceral and traumatic experience,” said Pierce, an associate professor at the Naropa Writing Center in Boulder, Colo., and the director of the Jack Kerouac School of Disembodied Poetics. “I felt like I needed to write about them, to be inspired by them.” 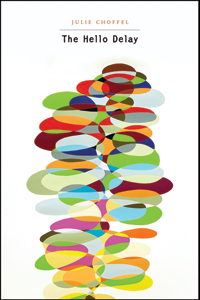 The result, Continuous Frieze Bordering Red, an unflagging meditation on borders—geographic, ethnic, racial—was chosen from about 350 submissions as the recipient of Fordham College at Lincoln Center’s Poets Out Loud (POL) Editor’s Prize.

The award brought with it publication of the 68-page manuscript by the Fordham University Press.

“It was the manuscript I kept returning to with admiration and fascination,” said Elisabeth Frost, Ph.D., associate professor of English, and the editor of the POL book series. “It’s both intellectually ambitious and moving.”

Although a single poem, Continuous Frieze’s five lines course lengthwise across the length of the book, obliging the reader to, in effect, turn the entire book’s pages five times to read the poem in its entirety.

“She’s invented a reading process that I found stunning,” said Frost, who has curated the POL awards since their inception in 1999.

“It’s not a lyric poem that is short that can be read once and understood,” Frost said. “It’s challenging.”

This is the first time that the annual competition, open to poets writing in English, has awarded an editor’s prize, this year selected by Frost and the poet Mei-mei Berssenbrugge, in addition to an overall POL Prize winner.

From the initial list of about 350 submissions, 29 manuscripts by 27 poets were selected as finalists by Frost; Heather Dubrow, Ph.D., Fordham’s John D. Boyd Chair in Poetic Imagination; and several other readers.

Berssenbrugge then chose Julie Choffel’s The Hello Delay as the recipient of the original POL Prize.

At POL’s Lincoln Center campus book launch for both winners on March 28, Berssenbrugge, a two-time American Book Award recipient for her poetry, praised the “passionate” imagery in Choffel’s poems, which she said are nonetheless imbued with a “homespun clarity.”

The Hello Delay explores the constant negotiations between what people know and what they expect, particularly during conversation.

Those interactions amount to what Choffel called “a weird permanence … echoes,” which unceasingly alter the meanings we think we glean when speaking with one another.

“We’re always translating to a certain extent,” said Choffel. “I think of my writing as something that takes things apart and puts them together again.”

At the book launch, Berssenbrugge, Pierce and Choffel read from their poetry for about 100 people, including students from three city high schools.