skip to main content
Return to Fordham University
You are at:Home»Inside Fordham»Petrarch Saw Humanistic Path to God in Religious Treatise 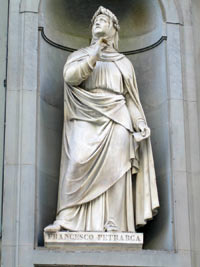 Barsella lectured on “Petrarch On Religious Life (De otio religioso): A Humanistic Challenge,” on Jan. 24 at the Faculty Lounge, McGinley Center, the first in a series of spring lectures sponsored by the Center for Medieval Studies. She said that Petrarch, an Italian scholar and poet of the 14th century, was not pining for a religious life when he chose a life of solitude and contemplation, but rather was taking a humanistic voyage of the self, something she referred to as the “meandering path of a human being.”

Barsella said Petrarch wrote his treatise after visiting his brother, Gherardo, who was a member of a monastic order. On Religious Life consisted of two books and was adopted by many monasteries, she said, to prepare novices in the spiritual life, as a treatise on “practical, moral theology.” Scholars, however, still debate whether Petrarch wrote the books for his brother’s community or for the wider intellectual community. Barsella said that the author saw a lay solitude, one that actively used poetry and writing for the moral and educational improvement of society, as being an equally valuable way to God as the traditional monastic path.

“To build a Christian, earthly city founded on ethics was as valuable an alternative [to a]life of meditation and contemplation,” she said.

Acknowledging that scholars differ as to Petrarch’s motivations and intent in writing the treatise, she said: “I don’t think Petrarch was longing to become a monk. There is very much this insistence [in his work]on exploring humanism, of looking into the journey you must take before making the journey to God.”