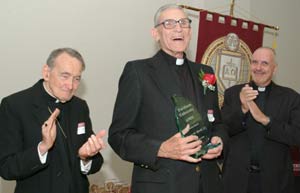 Vincent M. Novak, S.J., one of the founders of the Graduate School of Religion, receives a special award as Avery Cardinal Dulles, S.J., (left) and the Rev. Anthony J. Ciorra, Ph.D., look on.
Photo by Chris Taggart

Signs of a reinvigorated Catholic Church are all around us, said the Rev. Eugene F. Lauer, director of the National Pastoral Life Center, at the inauguralSapientia et Doctrina celebration, hosted by the University’s Graduate School of Religion and Religious Education on Sept. 30 in the McGinley Center Ballroom. The event honored individuals who have excelled in furthering the GRE’s mission, and that of the Catholic Church as a whole. Special awards were presented to John S. Nelson, Ph.D., Joseph A. Novak, S.J. and his brother Vincent M. Novak, S.J., the three men who founded the GRE in 1964. Father Lauer also accepted theGaudium et Spes Award for the late Monsignor Philip J. Murnion, his predecessor as the center’s director.

During his keynote address, “Hope for the Future of the Church,” Father Lauer spoke of meeting the needs of modern Catholics, and the role that the center plays in that mission. “Our goal has never been speculative theology, but to bring the meaning of Christianity down to a very earthy, pastoral level,” he said.

Father Lauer said it was important to distinguish hope from optimism: hope is deeply rooted in a faith in God. “Hope is simply trust and confidence that no matter what the trial, what the challenge, you can always have resurrection,” he said. “Even if I sometimes can’t see the positive side, I believe that Jesus will keep the promises he made.”

Father Lauer also pointed to a change within the Church since Vatican II. “Who was entered into the process of interpreting Christian meaning?” asked Father Lauer. “Women, married people, laity, people of color. New experiences in our tradition give new meaning.”

He also said that although the enrollment numbers of priests have declined over the years, the laity has increased exponentially. “We’ll always need priests,” Father Lauer said. “We’re a Eucharistic community. But what gives me hope is that so many [lay]people felt called to ministry. And all those new experiences move the Church forward.” 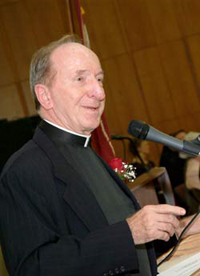 Father Eugene Lauer: Christianity needs to be brought down to “a very earthy, pastoral level.”
Photo by Chris Taggart

Father Lauer encouraged Catholics to consider their own experiences and to share them with others, and urged those in attendance to express their hope for the future of the Church in an assertive nature.

“There is something wonderful about being unafraid of hope,” he said. “After the sexual abuse crisis, we really need it. There can be resurrection. My final word to you is, have great faith in hope.”