skip to main content
Return to Fordham University
You are at:Home»Faculty Profiles»Pastoral Counselor Explores Link Between Spirituality and Post-Traumatic Growth

It was bereavement, ironically, that placed Mary Beth Werdel, Ph.D., at the helm of a course on death and dying at the Graduate School of Religion and Religious Education (GRE) this summer. 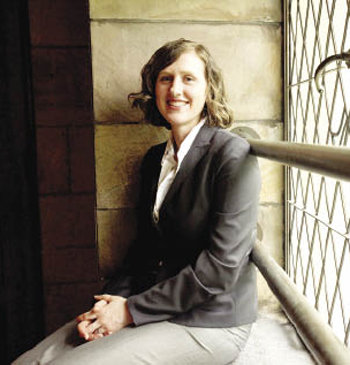 The course, Death, Dying, and Bereavement, was supposed to be taught by the Rev. Mary-Marguerite Kohn, Ph.D., an adjunct professor of pastoral counseling at GRE. But on May 5, Rev. Kohn, the co-rector of St. Peter’s Episcopal Church in Ellicott City, Md., and a fellow employee were shot and killed by a man who frequented St. Peter’s food pantry.

“She was such a wonderful human being—compassionate, loving, and quick to help,” said Werdel, assistant professor of pastoral counseling at GRE, who volunteered to teach the course in Rev. Kohn’s stead.

“Her spirit is definitely alive in the class. I try to bring her spirit in by using the structure of her syllabus, which she created before she died, as well as a few of the prayers and meditations said at her funeral,” she said. “Her tragic death shows the importance of preparing future pastoral counselors and care workers to work with those who are dying or bereaved in ways that do not further complicate a person’s grief, but rather assist in the healing process.”

As a professional counselor specializing in grief and loss issues, Werdel is uniquely qualified to teach a course on bereavement. She belongs to the school of thought known as positive psychology. This branch complements traditional models—which identify and remedy what is going wrong in an individual’s life—by identifying and nurturing what is going right.

She focuses particularly on post-traumatic growth, a phenomenon that evinces the “positive” side of trauma.

“Trauma is intrinsically negative, but in enduring the stress and trauma, we might ask, ‘Do I come to new understandings of myself, my relations with others, or my philosophies of life? And if I do, are these new experiences positive?’” she said. “We don’t push our clients to experience growth—that’s not the goal. The goal is to be aware… so that we can nurture that piece of a client, should it present itself, rather than mistakenly label it as Pollyanish thinking or denial.

Werdel’s particular interest centers on the relationship between post-traumatic growth and the influence of spirituality. Negative religious coping, such as feeling punished or abandoned by God, can hinder trauma victims in their healing process. However, those who experience spirituality as a positive force, especially as a way to find meaning in suffering, are likely to experience growth.

“The degree of someone’s maturity of faith, as defined by Benson and his colleagues as the degree to which someone embodies the priorities, commitments, and perspectives of a vibrant, life-transforming faith, is predictive of post-traumatic growth,” said Werdel, whose own research supports that this mature faith is a more powerful predictor of growth than personality or social support.

As for the correlation between mental health and spirituality, Werdel is again uniquely qualified; but on that matter, her expertise came uninvited.

During her senior year of college, Werdel’s 17-year-old brother Thomas disappeared while on a glacier expedition in Alaska. Rescue teams eventually concluded that he slipped while retrieving water from a stream at the edge of a crevasse and fell thousands of feet into the glacier.

“It was a profoundly stressful loss in my life,” Werdel said. “I began to notice how spirituality was very useful to me in my healing process. As a result, I started to examine my spirituality, break it open, and eventually come to own it in a new way. As a new, foundational piece of my identity.”

Conversely, she noticed that those in her life who had negative religious reactions seemed to struggle longer following Thomas’ death.

“I noticed how the people in my life who had secure relationships with God were moving through the grief and loss differently those who had troubling relationships with God, or were feeling abandoned by God,” she said. “I started to wonder if what I was experiencing in my own life, and what I noticed others experiencing in their lives was beyond anecdotal. I was curious as to if there was a conversation on the topic and, if so, what was evidenced by research.”

In addition to inspiring her own research, the experience later enriched her clinical work with undocumented Mexican and Salvadoran immigrants, whom she counseled before coming to Fordham in 2010.

“To lose one’s sense of home can be profoundly difficult, and some people need to find meaning after such a loss. Loss need not be death. Any change, even if the change is perceived as ‘good’ includes a potential loss experience. Spirituality is, for many people, a way to find meaning in their loss.”

It’s a message that she has learned through both her personal grief and clinical practice, and is now sharing with the students of Death, Dying, and Bereavement. Together they are working through the loss of their teacher, and preparing to, one day, guide others through grief.

“It reminds us of the importance of this work—that this is a need in our lives,” she said. “We are relational beings, and we are physically finite beings. We need to learn to hold the paradox—not run from it.”