Colleges and their surrounding neighborhoods have abundant opportunities to grow and thrive together, according to leaders from three New York colleges and universities, including Fordham, who discussed the issue at a recent conference. 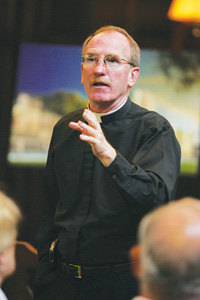 Joseph M. McShane, S.J., president of Fordham, explained how the University has reinforced its commitment to the Bronx.
Photo by Chris Taggart

Sitting on a stage and telling a few decades’ worth of stories, they showed some of the many ways that colleges, civic leaders and businesses can work together to turn struggling neighborhoods around. They gave specific ideas but also described the attitudes that colleges and universities must adopt—in particular, commitment to the neighborhood, said Joseph M. McShane, S.J., president of Fordham, one of the three panelists.

“In your commitment, you have to be in dialogue constantly with the neighborhood so that you don’t become an ‘ivory tower’ institution. Rather, you become—happily and proudly—part of the fabric of the neighborhood,” Father McShane said.

He and the other panelists spoke at a conference for the city’s business improvement districts. The city’s Department of Small Business Services held the event near Lincoln Center at the New York Institute of Technology.

The event highlighted the role of “anchor” institutions—in particular, universities and hospitals—that are firmly rooted in a neighborhood and provide an economic foothold to local businesses. “The health of the anchor and the health of the community are inextricably linked,” said keynote speaker Mary Kay Leonard, president and chief executive officer of the Initiative for a Competitive Inner City, based in Boston.

“The decay of the Bronx never jumped over the four institutions,” he said, recalling the fires in the South Bronx that he could see approaching the Rose Hill campus. “We stood our ground and we committed. We became, in a certain sense, not just the anchor, but the wall.”

Starting under presidents James C. Finlay, S.J., and Joseph O’Hare, S.J., Fordham reached out to listen to the community’s aspirations, Father McShane said. Fordham took part in efforts to save the housing stock in the Bronx and increased its commitment to local hiring, among other efforts.

More than half of the University’s 4,850 employees are from the city, which is “by design,” he said at the July 12 event.

He noted that all employees can take classes for free. “This roots us in the neighborhood and enables us to be for our work force what we promise to be for all the students who come to us,” he said.

He said Fordham becomes more distinctive and appealing to students by embracing the city as a place for them to grow their minds and hearts. He noted that thousands of Fordham students serve local community organizations every year.

The other panelists described reaching out to their communities in ways that were sometimes novel. The revitalization of the Union Square area began with cocktail parties where police and representatives of community organizations could chat informally, said Jonathan Fanton, Ph.D., a visiting fellow at the Roosevelt House Public Policy Institute at Hunter College and former chairman of the Union Square Development Corporation. “We just talked, and we told stories, and we learned,” he said.

One panelist—Félix Matos Rodríguez, Ph.D., president of Hostos Community College in the Bronx—said he approached a local employer and, instead of making the expected fundraising pitch, asked about the employer’s workforce development needs.

“They didn’t know what language I was speaking,” he joked, adding that such efforts can show employers the value that area colleges create. The college is also preparing a map to direct students and staff to nearby businesses, he said.

When a Bronx business representative asked the panel about courses to help merchants communicate with customers who don’t speak English, Father McShane said Fordham is trying to develop certificate programs to meet local needs. But in the meantime, he said, businesses can attract bilingual Fordham students as interns by offering to give them management experience.

“We have students who are always looking for internships of every description,” he said.