skip to main content
Return to Fordham University
You are at:Home»Inside Fordham»Orthodox-Catholic Conference To Focus on Fundamentalism

It started a year and a half ago with a blog post. Writing on a site maintained by the Greek Orthodox Archdiocese of America, George Demacopoulos, PhD, warned of the perils of growing fundamentalism in the Orthodox church. In some parishes, he wrote, young people are forced to choose “between religious extremism or no religion at all.” 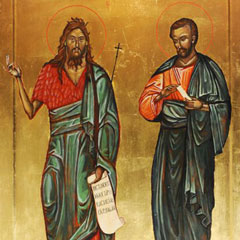 Demacopoulos said he got “loads” of responses—both positive and negative.

“That little op-ed probably got more attention than anything I’ve ever written,” said Demacopoulos, who co-wrote the posting with his Fordham colleague Aristotle “Telly” Papanikolaou, PhD.

Given the reaction, it became clear to them both that fundamentalism needed to be addressed at their next Fordham Orthodox-Catholic relations conference.

From Thursday, June 23 to Saturday, June 25, the fourth installment of the Solon and Marianna Patterson Triennial Conference on Orthodox/Catholic Dialogue will be held at Fordham Law School. (Register online.) With presentations from more than a dozen scholars from the United States and abroad, it will focus attention on the three closely related concepts spelled out in the conference title: “Tradition, Secularization, and Fundamentalism.”

“The animating question of the conference is, how do religious communities that value tradition in a secular age retain that tradition without lapsing into fundamentalism?” said Demacopoulos, professor of theology and the Father John Meyendorff & Patterson Family Chair of Orthodox Christian Studies.

The question is important because fundamentalism in both the Orthodox and Catholic churches tends to drive those churches further apart, said Papanikolaou, who is a professor of theology, the Archbishop Demetrios Chair in Orthodox Theology and Culture, and co-director, with Demacopoulos, of Fordham’s Orthodox Christian Studies Center. “It’s something that really is affecting Orthodox-Catholic relations,” he said.

And, yet, defining “fundamentalist” can be troublesome, he said.

“Fundamentalists will claim that they’re not fundamentalists—[that]they’re just being true to the tradition,” he said.

Secularization is a hot-button term too, Papanikolaou said, because in sociological circles it has come to refer to “the inevitable withdrawal of religion from public life as a society modernizes.”

Both Papanikolaou and Demacopoulos note that the very term is often seen as inherently biased.

“Some scholars would claim that secularism is a decidedly Western category that always refers to Christianity, and so you can’t map it onto other places in the world that have very different histories of religion and society,” Demacopoulos said.

The conference is endowed by a gift from philanthropists Solon and Marianna Patterson, a husband and wife raised, respectively, in the Greek Orthodox and Roman Catholic traditions.

As with the three previous Patterson conferences, the proceedings of this one will be published by Fordham University Press, Demacopoulos said.

After the blog posting last year, he said, he and Papanikolaou heard from Orthodox priests and bishops who agreed the professors needed “to say this kind of thing because they can’t.”

“They are hamstrung in what they can say publicly,” he said. “The Roman Catholic church has a number of universities, and they literally see the universities—especially Jesuit universities—as the place where the church does its thinking, and where you have the safety of academic freedom for people to raise questions that you can’t raise in seminaries and you can’t say from the pulpit.”

The Orthodox church doesn’t have that kind of space, Demacopoulos said.

“That’s one thing that makes our Orthodox Christian Studies Center unique and important, is that we can ask the kinds of questions that are often taboo at an Orthodox seminary.”