skip to main content
Return to Fordham University
You are at:Home»Inside Fordham»Of Mice and Men: Exploring the Genetic Roots of Cancer 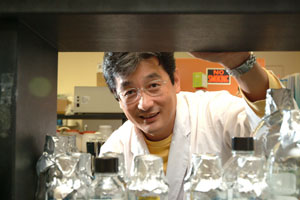 Masaaki Hamaguchi, Ph.D., likes to play. For instance, when he is not working toward the development of gene-based treatment for breast cancer, he likes to take his two young children to the Bronx Zoo. He is also a devotee of Go, the 4000-year-old strategic board game with an incalculable number of positions (one estimate is 10 to the 750th power). He even describes his work as a kind of competition, albeit an exciting and important one.

In 2002, Hamaguchi, 46, now an associate professor of biological science on the Rose Hill campus, discovered a gene that by all indications has the ability to suppress the growth of breast cancer. While working at the highly regarded Cold Spring Harbor Laboratories in Long Island, he finished first, he said, in the “race to discover the meaningful gene”—that rare one that has a direct effect on cancer. It is a race in which legions of scientists around the world compete, year after year.
“I lost three times before,” Hamaguchi said, referring to earlier research initiatives. “This time I won.”

One reward Hamaguchi received was a grant totaling $1,600,000 from the National Institutes of Health, a portion of which will fund his continuing study of the cancer gene at Fordham through March 2008.

“Of course you need to be good,” he said. “But you have to have some luck, too.”

Sitting in his Larkin Hall laboratory, dressed in jeans and a casual shirt beneath his lab coat, Hamaguchi smiles easily and often, and appears youthful enough to be mistaken for a grad student — not the expected picture of someone who does the sort of intense work he describes.

Hamaguchi and his researchers at Cold Spring Harbor identified the “meaningful gene”—dubbed DBC2, for “deleted in breast cancer”—by way of its absence, he said. During their research, they found that the gene was absent or inactive in the breast tumor specimens they examined. To determine the effect it would have on the cancer, it was reproduced from another source by a method called “positional cloning,” then injected it into the tumor. The results were as hoped for: the gene killed the cancer cells, or stopped them from growing.