skip to main content
Return to Fordham University
You are at:Home»Colleges and Schools»Graduate School of Arts and Sciences»NYC Rental Is a Real “Barkgain” 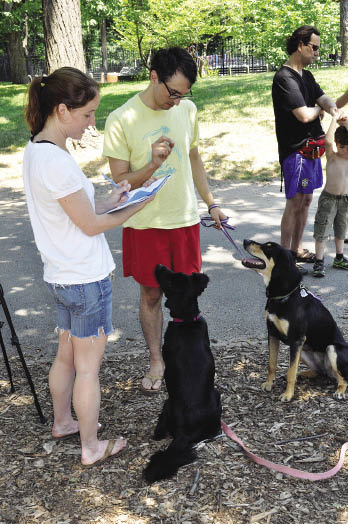 Katherine Long, a GSAS doctoral candidate, helps raise donations and awareness for animal rescue services by offering her own pets for rental to Manhattan’s many “dogless.”
Photo by Joanna Klimaski

She and her husband enjoy visiting Central Park on the weekends with their two dogs, usually passing the afternoon in the shade of an oak tree.

The quartet wouldn’t draw much attention from park passersby—if it weren’t for the hand-painted sign advertising their dogs for rent.

Long, a second-year Ph.D. candidate in the Graduate School of Arts and Sciences’ (GSAS) developmental psychology program, is the creator of the charitable “Rent-a-Dog” service. For a donation, park goers can “rent” one of her dogs for a 20-minute walk, the proceeds of which go to animal rescue organizations.

“I had the idea in college that renting a dog in the park would be fun. Plus, I was always involved in volunteer work in shelters,” said the self-proclaimed dog lover. “So once we owned these two dogs, I combined the two ideas to see if it would work.” 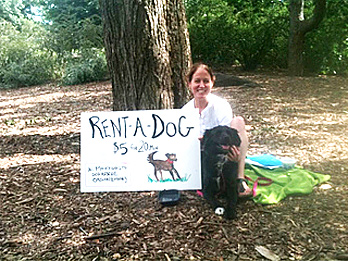 Long had volunteered in shelters throughout high school and during college had served as a “foster mom” for dogs awaiting adoption. Now married with two dogs of her own, she devised a plan to both raise money for shelters and spread awareness about rescue animals.

“I’m a student, so coming up with $100 on my own is pretty tough,” Long said. “I figured this was a good way to raise money, and it’s good exposure for rescue dog services.”

In mid-June, she and Ocho, a border collie/retriever mix, made the one-hour commute from their home in North Stamford, Conn., to Central Park and set up shop. On their first day in business, the pair raised more than $100 for Ruff Start Rescue, the Westchester-based animal rescue group that saved Ocho from a “high-kill” shelter in South Carolina.

That first successful venture convinced Long to schedule a second weekend. She and her husband, Dan Villalon, took Ocho and their other dog, Isla, a Labrador/shepherd mix, back to Central Park on July 1—incidentally, Long’s birthday. This time, she split the donation proceeds between Ruff Start and Shelly’s Angels Saving Strays, the shelter that rescued Isla.

After just an hour in the park, the group had succeeded in raising more than $50—many donations coming from people who already had their own dogs to walk, but who wanted to help nonetheless.

“Some people will say that they don’t have time to walk the dog, but they still want to donate,” she said. “Then there are a lot of people who say they want a dog or their kid wants a dog, so they’ll come and spend time with the dogs.”

In addition to giving back to the shelters that saved them, Ocho and Isla are also helping Manhattan dog lovers who can’t have pets or don’t feel they have the time to own one.

“There’s more of a need for these urban folks who don’t have dogs, whereas in Connecticut, most people already have dogs and backyards,” Long said.

Given the success of the first two ventures, Long says she plans on hosting a third “rent-a-dog” day sometime during the remaining summer weeks. She is even thinking about expanding the service to dog lovers of Inwood and Prospect Park.

“It’s a great way for me as a student to raise money for something that I care about, and to do it in a different way,” Long said. “And it’s also helping these people enjoy a dog for 20 minutes, so it’s more than just writing a check.”