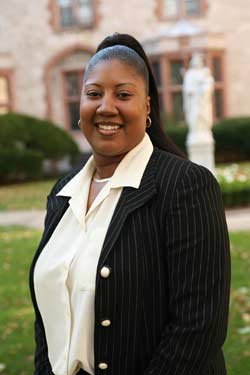 A Noah’s Ark snow globe sits on the desk of the Rev. Erika Crawford, one of many in her collection of figurines from that biblical story. “He was stuck on the boat, but the storm passed,” she said. “Sometimes, you’re stuck someplace for a reason.”

This is the kind of spiritual advice Rev. Erika, as she likes to be called, imparts to students as the new Protestant chaplain-campus minister at Fordham University, duties she assumed in July. “Erika is the one who has rooted and grounded the Protestant Chaplain position in Campus Ministry at Fordham,” said Joseph Currie, S.J., director of campus ministry.

“Our philosophy [in campus ministry]is to respect freedom of other faiths to practice and to stop proselytizing,” he said. “Erika is good in bringing appreciation for other faith traditions while asserting her own.”

The demographics of Fordham’s students has changed much since its founding: according to Father Currie, approximately 70 percent of students at Rose Hill are Catholic; in the recent past, the number was closer to 90 percent.

“It speaks to Fordham’s desire to hold fast to Christian traditions that are not limited to Catholic,” Rev. Erika said. “[Fordham] has a desire to be a greater part of the New York community.”

Rev. Erika found her path to the ministry 10 years ago while a college student, when she wrote an essay for a class that turned into a sermon. “That wasn’t the intention,” she said. “I wrestled with that [decision]two years. I’ve learned that when you fight with God, you never win.”

Raised in the Bethel African Methodist Episcopal (AME) Church in Stamford, Conn., she turned to a pastor near her college in South Carolina for guidance as she considered becoming a minister. At age 23, she gave her first sermon, “Fear Not, I Have Redeemed You,” at the Reid Chapel AME Church in Columbia, S.C.

Rev. Erika finished her bachelor’s degree in organizational management at Voorhees College, while continuing to prepare for her first year of seminary. “It was a long, hard, process, but I stayed faithful,” she said. “I had to give up a certain lifestyle, and make decisions difficult to make in your 20s. To walk away from that was hard, but it’s something all young Christians are faced with.”

After receiving her Master of Divinity degree at the New York Theological Seminary, Rev. Erika returned to her home church in Connecticut to fulfill her calling. She became the first woman ordained in the 110-year history of the Bethel AME Church in Stamford, where she continues to serve on the ministerial staff.

At Fordham, she hopes to “build a strong Protestant interfaith community where students have a place to worship on a consistent basis and have a forum to study the Bible,” she said. She also wants to raise those voices on high, and to rebuild the University’s gospel choir.

After only a few months of outreach, she has nearly 40 students attending Sunday services at the University Church. About a dozen students, both Protestant and Catholic, also attend her Tuesday-evening Bible study group.

“Catholic students can gain from being open to dialogue with students of different faith backgrounds,” she said. “It’s an eye-opening experience what we have in common—love and passion for Christ and [a]need for fellowship with other Christians.”

She only wears her “collar and regalia” on the first Sunday of every month, which is Communion Sunday in most Protestant churches. She spends much of her days on campus dressed in lay clothes, meeting students and learning about the issues that are relevant to their lives.

“For young people, it’s important for them to see clergy are real people with real issues,” said the 31-year-old minister. “I’ve been able to identify with them; I’m older than them but not removed from their generation.”

She also said that she believes she can play a crucial role the spiritual lives of the University’s African-American students. “It’s important for young black Christians to have someone who identifies with their faith,” she said.

Her welcome to all, though, is evident in her open-door policy, where all students are encouraged to come to her office, whether they have an issue they want to discuss or just want to sit with her. “If there’s anything I can do, I’ll do it. If not, I’ll pray with them and for them,” she said. “I’m not a miracle worker, but I know a miracle worker.”

This is the way that Rev. Erika lights a way for students who, like Noah, find themselves in a storm. Her motto is, “No matter how hard the rain falls or how long the storm lasts, God keeps His promises, and this too shall pass.”