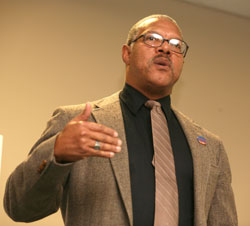 For Rev. Daniel Buford, Hurricane Katrina was a wake-up call to social and political action.
Photo by Michael Dames

It often takes a cataclysmic event to spur someone to action. For the Rev. Daniel A. Buford, that event was Hurricane Katrina.

Rev. Buford, a civil rights leader, preacher and director of the People’s Institute for Survival and Beyond, addressed students and faculty Rita Hall on Fordham’s Marymount Campus on Oct. 2, urging those in attendance to become more active in their communities, and the world-at-large, in a speech titled “Holding the U.S. to Account for Katrina.”

Rev. Buford said had not been very politically active during his adult life but that he felt a new call to action last August, as he watch U.S. government’s mishandling of rescue efforts in New Orleans. “I found myself stunned,” he said. “I was mad as hell, and I felt like we shouldn’t take it anymore.”

Rev. Buford said he started the People’s Institute for Survival and Beyond in response to witnessing New Orleans residents being bullied by the federal and state government. By getting involved, Rev. Buford felt he was able to help protect the civil rights of those affected by the catastrophe, and hoped that others would follow his lead.

“There’s never been any revolution or social upheaval that didn’t have a strong emotional component to it,” he said. “No rights were ever fought for by people who were blasé. I know that you have some things that you’re emotional about—you need to do something about them other than just let them touch your heart.”

The federal government response to Hurricane Katrina, especially regarding African-Americans and the poor, was civil rights violations, according to Rev. Buford. His organization has since sent representatives to testify about the situation before the United Nations, and People’s Institute for Survival and Beyond has helped shape that world body’s policy towards aiding the hurricane’s victims. Rev. Buford said issues he raised helped form the template for the United Nation’s questioning of the U.S. government.

“Even though the United States government criticizes the United Nations, they do care what the U.N. thinks,” he said.

The clergyman said that African Americans had to look beyond their own nationality in this extreme circumstance. “Since [the government]is unwilling or unable to protect our civil rights, we as people of African descent had to look at our rights not just as citizens of the United States but as citizens of the world,” Rev. Buford said.

He went on to question the students in attendance on matters of race, and offer suggestions on how to use the government itself to file civil rights complaints and question its treatment of the poor and the indigent.

Rev. Buford closed his discussion by urging audience members to do everything they could to take action in the face of injustice, even presenting specific ways to do so.

“It’s very important for regular people that aren’t lawyers, that aren’t jurists, to take initiative on the things that are tugging at your heart,” he said. “We must prepare ourselves as students of life, [and]bring these things before the world.”