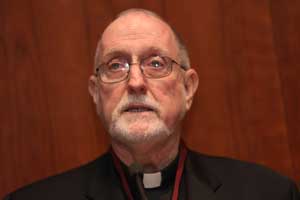 Reciting that small yet potent word in three languages, Fordham’s new Laurence J. McGinley Professor of Religion and Society negotiated the similar understandings of faith among Jews, Christians and Muslims, and vowed to strengthen interreligious dialogue at Fordham University.

Patrick J. Ryan, S.J., Fordham’s former vice president for mission and ministry and a scholar of comparative religion and Islamic studies, was installed on Nov. 18 as the second McGinley Professor by Joseph M. McShane, S.J., president of Fordham. After the installation, Father Ryan delivered his inaugural lecture aimed at opening Fordham’s gates to more frequent and fervent interreligious exchange.

Father Ryan set the tone with “Amen: Faith and the Possibility of Jewish-Christian-Muslim Trialogue,” drawing upon the Hebrew Bible, the New Testament and the Qur’an to examine the bilateral relationship between God and his people.

“Here in America I have learned from Jews, and during [my]many years in Africa I learned from Muslims,” said Father Ryan, a New York native who spent 26 years in Africa in faculty and administrative positions. “I have come to realize over the years that we use many of the same religious categories.”

Father Ryan examined similarities and differences among the three religions. Christians, he said, more often find expression through creeds or “organized statements” of faith than do Jews and Muslims, who are less centered on theology. But all three religions share a notion of the “bilateral, reciprocal nature of faith,” that consists of a bond between God and his people. This relationship, which he called the “ultimate context of faith,” appears in the Hebrew Bible as covenant, in the New Testament as new covenant and in the Qur’an as mithaq or ahd. 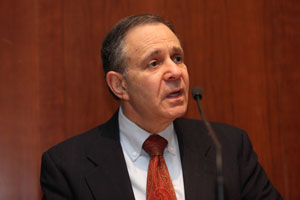 Differences do exist, however. In the Hebrew Bible, the Jewish people keep faith with a faithful and loving God, while in the New Testament the New Covenant with God is established through the fidelity of Jesus Christ.

“Is it too optimistic of me to suggest that all of us . . . have entered into existence—or continue to enter into existence—responding to the Lordship of God with a joyful, ‘Yes, we have born witness’?” said Father Ryan.

Father Ryan said he would devote his tenure as McGinley Chair to discovering common ground among the three religious traditions.

At the beginning of his lecture, Father Ryan paid homage to his predecessor, the late Avery Cardinal Dulles, S.J., who held the McGinley Chair for two decades, and to Father Ryan’s mentor at Harvard, Canadian theologian Wilfred Cantwell Smith. It was Father Avery Dulles, Father Ryan said, who encouraged him in the 1960s to attend Harvard to study under Smith—an eminent theologian within the Calvinist tradition. 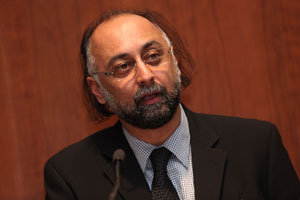 Rabbi Daniel Polish, Ph.D., spiritual leader of Congregation of Shir Chadash in Poughkeepsie, N.Y., stressed the Jewish model of faith as “partnership” between God and humans. He also said global changes in the last few decades signal that “theology can no longer be done in isolation.”

Amir Hussain, Ph.D., professor of theological studies at Loyola Marymount in Los Angeles, called faith “the appropriate category of comparison in all three of our religions.” He closed with a quote from the writer Salman Rushdie, to express his own hopes: “For God’s sake, open the universe a little more!”

The McGinley Chair, named for Fordham’s 28th president, was established in 1985 to encourage scholarship on the intersection of religion with the legal, political and cultural forces in American society.

Father McShane said Father Ryan’s appointment ushers in “a new phase in the history of the McGinley Chair.

“These dialogues and conversations are not happening anywhere else,” Father McShane said. “If not New York, where? If not Fordham, who?”