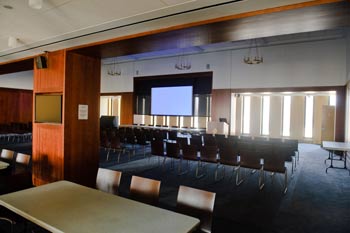 The newly renovated 12th-Floor-Lounge seats up to 282 people.
Photo by Ryan Brenizer

Fordham’s construction projects are on the rise, so to speak.

The University undertook an ambitious roster of capital projects in 2008. The two largest are Campbell Hall, a 460-bed-dormitory named in honor of Robert Campbell (CBA ’55) and his wife, Joan, which is currently under construction, and a new 62,500 square-foot campus in Westchester County, N.Y., which opened in time for the fall semester.

Several smaller projects also were realized at the Rose Hill and Lincoln Center campuses. They include:

• A new multi-million-dollar data center at the Lincoln Center campus to support administrative and academic computing and improve connectivity.

“This year has been one of the busiest,” said Marc Valera, associate vice president for facilities management, who oversees capital projects for the University. “Fordham is addressing much-needed improvements in new construction as well as in our existing facilities, and the work going on is intended to bring us forward to our 2016 [Master] Plan at both campuses.”

Two rooms in JMH have been converted into a 900-square-foot meteor lab to enable the study of trace elements from ancient meteorites dating back some four billion years. The centerpiece of the lab is a new $100,000 plasma mass spectrometer, an optical instrument that measures substances through the electromagnetic spectrum. According to Jon Friedrich, Ph.D., assistant professor of chemistry, the machine is so precise that it can analyze elements present in geological samples at quantities in proportion to “a grain of salt in an Olympic-sized swimming pool.

“This will definitely open up some new channels of research,” Friedrich said. “At Fordham, we are hoping to promote interdisciplinary sciences, and this [lab]will help, especially in the area of environmental research.”

Since meteorites must be prepared in a hazardous acid wash before they can be studied, the University installed special ventilation and piping systems to dispose of the liquid and fumes.

“We gutted it down to the shell and gave it a completely new finish,” said Peter Bundock, P.E., assistant vice president of facilities at Lincoln Center. Additional upgrades to the space include a new pantry, new chairs and fabric-paneled walls.

Not to be outdone are the remaining spaces on the 12th floor—the 36-seat President’s Dining Room, the public elevator bank area, and the smaller Plaza View Room, all of which have been redone featuring identical wood paneling, audio-visual upgrades and other decorative improvements. An impressive bronze metal cladding was added to the 12th-floor elevators’ doors and jambs. “

This is the biggest full-floor renovation done since the space was built,” Bundock added.

The projected finish date for the Black Box Studio is late October. The teaching theatre will hold 51 upholstered seats sloping toward a low stage and will have technically advanced lighting and sound. Its will be renamed the Veronica Lally Kehoe Studio Theatre.

Finally, a major behind-the-scenes improvement is the University’s new data center at the Lincoln Center campus. The 1,200-square-foot air-conditioned space houses more than 200 servers to keep Fordham’s computing systems and electronic data up and running. The installation of a new back-up UPS (uninterruptible power supply) system will help maintain power on campus through emergencies, according to Gerard Cariffe, Ph.D., associate vice president and chief technology officer for Fordham IT.