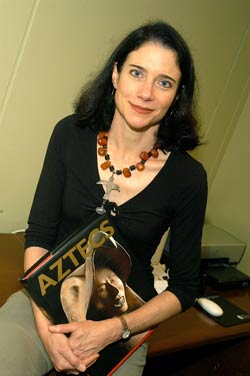 Eight years ago, Barbara Mundy, Ph.D., associate professor of music and art history, found herself struggling to dig up resources on the colonial period to use in a course on colonial Latin American art.

As an art history scholar who had veered early in her career toward researching the cartography of New Spain (as Mexico was once called), Mundy was doubly aware of the reasons for such thin source material: Nations such as Mexico and Peru, who won their struggle for independence from Spain in the 19th century, wanted little to do with their Spanish heritage.

“The colonial years were looked upon as a time when these nations were in bondage to Spain, so there weren’t a lot of art history resources from the period,” Mundy said. “Nowadays, however, scholars have become more interested in the idea of cultures in contact with each other. Suddenly, the colonial moment in Latin America seems pregnant with possibilities.”

In devising the project, Mundy and Leibsohn placed themselves at the forefront of a new paradigm, both in concept and in execution.

“Traditional art history looks at monuments created by elites—sculptures, portraits—and those are what one encounters in museums of art,” Mundy said. “But people have created things, and have paid attention to visual qualities in a whole range of creations—things like a tobacco bag, or a teapot. A big challenge of VISTAS is to not only include the canonical monuments, like the cathedral in Mexico City, but also include objects that reflected the creations of a wider span of people, particularly indigenous people.

“We are broadening the canon so that we don’t look at elite works in isolation,” Mundy said, “but actually view them in dialogue with a much wider sphere of visual products from people from many ranks of society.”

Along with filling a gap in scholarship, Mundy said the VISTAS project seeks to inspire a new approach to scholarly narrative as well. Unlike a textbook, which presents the narrative to a student, the CD and the website enable users to devise their own narrative and to expand on learning styles.

“There are any possible number of paths through VISTAS,” Mundy said. “We’re trained to value the [existing]narrative, but in pedagogy, that’s not actually how we learn. It’s much more effective to explore a topic oneself.”
Mundy’s interest in seeing things from all angles developed early, when she realized, while studying pre-Colombian art, that Aztec civilization was only really known through “hostile sources.”

“I wanted to know, How do you actually find the truth about this culture?” she said.
Mundy started digging through colonial source material. She found a corpus of maps of New Spain, made by both indigenous people and Spaniards, that hadn’t been written about. The result of her study was a book, The Mapping of New Spain: Indigenous Cartography and the Maps of the Relaciones Geográficas (University of Chicago Press, 1996), which explored the notion of a map as a culturally subjective work of art that reveals both geography and a fuller sense of a community’s and a people’s history. To Mundy, reading a map is less about where one is going than where one has been.

“At the time there was an open question as to whether cartography was really a Western phenomenon—partly for lack of evidence of other cartographic traditions,” she said. “So the book was news to a lot of people that there was actually a mapping tradition that existed independently of European mapping. These maps revealed a deep wellspring of traditional indigenous mapping, with a different set of understandings [of the environment].

“Mapping is the result of cultural negotiation,” she said. “In that the final map is not just the product of one artist, but an agreed-upon vision of what the community looks like.”

For Mundy, who is embarking on new research exploring the transition of 16th century Mexico City from the Aztec capital to the Spanish colonial capital, understanding that cultural negotiation in the creation of art is the common thread running through her scholarship.

“The art of this period was not just created by Spaniards alone, although they were culturally dominant, but it was really the result of interchange between this huge indigenous society and the Spaniards,” she said. “And to get at those interchanges, or mergers, is what I work on.”